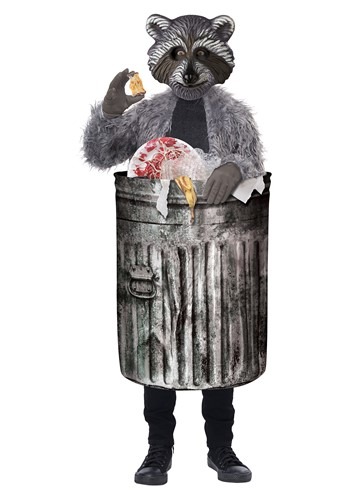 Raccoons can be pretty big pests. They're always getting into trash and strewing it around. They're pretty dirty and stinky (though we admit, not as stinky as skunks), and pretty much everyone agrees that they can be real nuisances. Then there's always that worry about if they have rabies, and you never want them around your dog or cat because maybe they'll get into a big fight.

Trash is another thing that most people can universally agree on: It's unpleasant. There's a reason we put our garbage into garbage cans instead of just letting it sit on our counters or pile up in corners of our room (unless we're teenagers, of course). Nobody likes old moldy bread, rotting cheese or used paper towels. We pay people to take it away because we don't want to deal with it.

So, since everyone agrees that raccoons are pests and trash is unpleasant, the only thing to do with both is... make a costume based around them for your kid to wear. Well, okay, that's kind of a leap in logic, but it's actually a pretty cute costume!

This Kids Trash Panda Costume somehow manages to transform two pretty unpleasant things into something super cute for your kid's next costume party. The costume comes with a raccoon mask, a furry gray-and-black top, and a garbage bin around the waist that we've helpfully pre-stuffed with all sorts of garbage. (We promise there's nothing from under our bed... probably!) You could always add to it yourself if you want, but we're not sure that other partygoers would appreciate that!

With this fun Kids Trash Panda Costume, every day is garbage day. Just keep an eye out for the garbage truck, because you'd hate for your trash panda to get scooped up!