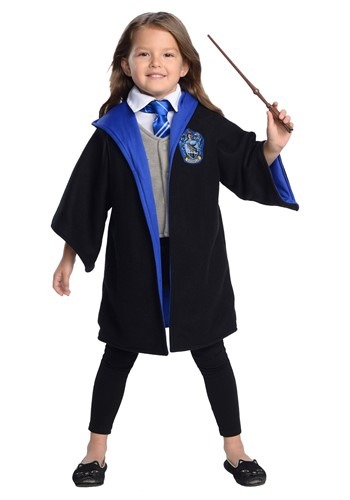 Have you found yourself watching your little one with amazement? Are they becoming so smart so fast? Maybe too fast? Maybe a touch alarming, even? Have you been picturing what sorts of great schools they are going to get into and the spectacular and world-changing careers that they'll be entering in no time? ... Only to have them smirk at you as though it is silly that you're thinking so small? Perhaps you've caught them doodling answers to complex calculus problems?

Okay, maybe not that last one... but we have no doubt that your little kiddo has had at least a couple moments where you've realized that they're a pretty brainy tyke! Now, we're not saying that they'll definitely be developing magical powers and may soon receive their letter of invitation to Hogwarts, but it is never too soon to start preparing for a future where your bright and shining kiddo might show up with the true blue colors of House Ravenclaw!

Time to celebrate your little wizard in the making and the bright future that their smarts may bring! You can do that easily with this Ravenclaw costume for your toddler. This is a lovely but simple, long-sleeved robe that features a black overall tone with blue accents in the lining, hem, and down the seam. The Hogwarts sigil is a patch on the chest. Accent the look further with a Harry Potter wand and that blue tie is going to make your kiddo looking like they are ready to cast all sorts of exciting spells!

Some might think that the magical colors of Ravenclaw are of the silver variety from the films, though the clever will know that Ravenclaw's blue and bronze from the books reflect the airy powers of the sky and the smarts they are believed to bring! One thing is for sure: your kid is going to look smart in this Ravenclaw look.

Size Chart
2T4T
Inches
Centimeters
Costume Sizing Tips
Questions & Answers
There are no questions for this item yet. Be the first to ask a question!
Ask a Question