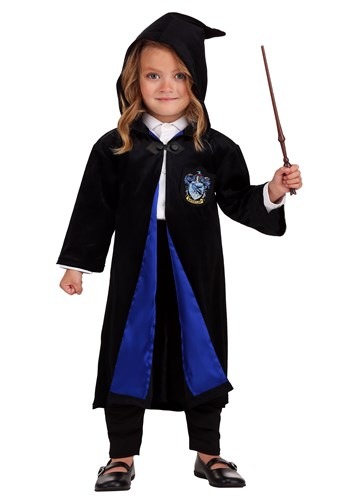 When Filius Flitwick received his letter from Hogwarts School of Witchcraft and Wizardry, his family never could have guessed he would go on to become one of its greatest professors. What they did know is Filius would need some custom robes. If the little half-goblin wizard was going to be a great wizard one day, his family wanted him to start on the right foot. The easiest place to start was his wizard robes. So the Flitwick family took the familiar trip to Diagon Alley and requested a fine pair of plain black work robes be made to fit his tiny stature.

The intelligent young wizard was a model student. His talents in the classroom soon helped him overcome the goblin-prejudice that his family feared would shadow him. To make sure no one would ever underestimate him again he performed a nifty little trick. At the final feast of term, Filius stood on the bench of Ravenclaw table and turned his plain black work robes into something much more special and the tradition of wearing house colors and crests was born.

This set of Deluxe Ravenclaw Robes are a tribute to the embellished robes that became common at Hogwarts. The sleek black robes feature the royal blue of Ravenclaw house in the lining and the Ravenclaw eagle stitched to the front panel. These robes are just the thing to get your little Ravenclaws ready for their first year at Hogwarts school. Any youngster would be proud to wear a look invented by the head-of-house.

Though many won't believe the tale, the wise, creative, and original Ravenclaws don't fear what others call crazy or bizarre. So when the youngest witch or wizard in your family is sorted into Ravenclaw house, make sure they are ready to carry on the legacy of their eccentric head-of-house in these Ravenclaw Robes.