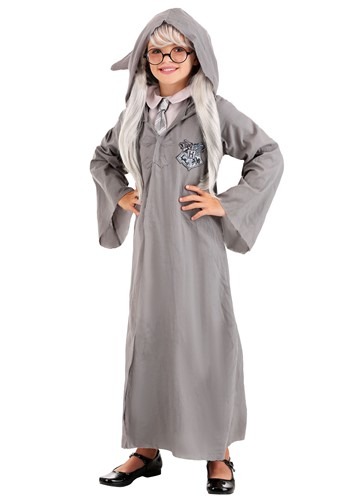 Have you ever given much thought to why Moaning Myrtle is so miserable? Yeah, we know she didn’t have a very good time at Hogwarts and then met a Basilisk face-to-face (which didn’t end well). She got in trouble for haunting Olive Hornby (even though Olive picked on Myrtle first and may hold a little blame in the Basilisk incident) which led her back to Hogwarts. But, tragic end aside, we think Moaning Myrtle is missing a great opportunity.

As a ghost, she should have the run of Hogwarts castle. Instead, she spends her days wailing in the U-bend. Myrtle could be exploring every secret the castle holds. We’ve heard about her trips to the Black Lake and the Prefect Bathroom—clearly, she’s not trapped in the girls’ bathroom. If Myrtle tried, we think she could put Peeves to shame (instead of letting him bug her) by using the fact that she still looks like a 13-year-old and can blend in with the students to her advantage. The Marauders and the Weasley twins could have learned a thing or two from a ghost with a knowledge of Hogwarts that spans life and death, instead Myrtle let them avoid her like the rest of the school. She could have been Mischievous Myrtle, but all her wallowing in a deserted toilet really put a good thing to waste and landed her with her unfortunate nickname.

Moaning Myrtle could use a role model. Your kiddo can show the real Myrtle what she’s been missing dressed in this Moaning Myrtle Costume. While they’re off surprising friends, enjoying sweets, and laughing the night away, Myrtle may just see herself changing her tune.