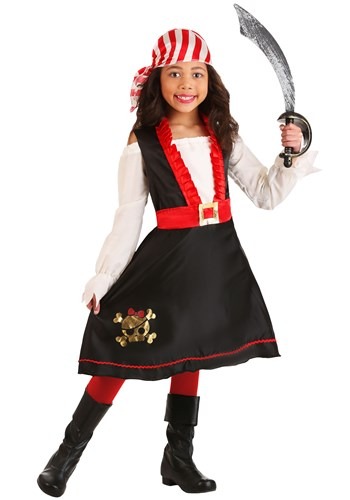 Is your girl on the fence about dressing up as a pirate? We get it. Being a pirate looks like a lot of fun, but some pirates don't exactly have a cute look. If you're going to head out on adventures on the high seas, you want to look fashionable while you're doing it!

But, hey, not all pirates are grisly scoundrels! Sure, the popular image of the pirate would make you think that every buccaneer out there has a poor fashion sense and an even poorer attitude, but we're here to let you know some pirates out there liked to dress in pretty clothing. Pirate captains were quite notorious for wearing lavish and sometimes daring outfits! Not only did it inspire confidence from the crew, but it also showcased their success as a pirate. If your girl wants to have a cute look AND be a rough and tumble pirate, just turn her into the captain and let her wear this Pretty Pirate Costume for girls.

This pirate costume lets your girl have the best of both worlds! It starts with a simple dress, which is a knee-length style with a square neckline. It features red ruffles along the front and a faux belt around the waist. The skirt features a foil Jolly Roger emblem on the skirt, complete with a little red bow on top. The costume also includes a simple headscarf to complete the look! It has a red and white striped pattern and gives your girl a true swashbuckler style.

Queen of the Seas

Get ready! When your girl wears this Pretty Pirate Costume, she'll immediately assume the role of captain. That means she'll be the one giving orders and she'll be the one leading the expedition for the next big treasure!