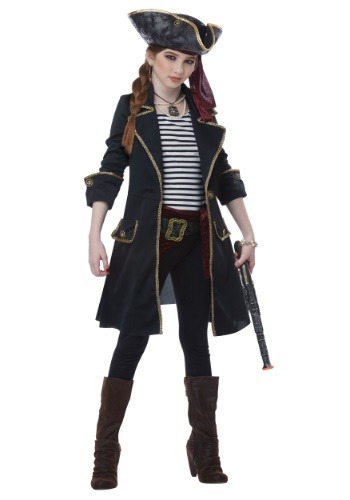 They said the high seas were no place for a girl. They said that it was bad luck to have a female aboard the ship. They were right about the bad luck, once your girl boarded the ship, it was bad luck for the captain and the first mate. The crew soon learned that this little lady knew what was up. She was only tolerated on board until the Kraken showed up. After she cleverly dispatched the beast, the crew had to have her as their captain.

You always knew your daughter would be the one defying convention, you just didn't know it would happen so early. Sure, it's hard to not see her for the long months that she's at sea. After she brought back the booty of her first adventure, you soon learned that there's nothing you could do to stop her from pursuing her seafaring career. Your job is to make sure she's got the right clothes for the job. All sailors need boots and a long coat to protect them from the hurricane winds. All captains need the tri-corner hat to make sure that their crew doesn't forget who's in charge.

When she dresses up in her ensemble, it won't be long until your little captain gets into character. Don't be offended when she calls you a scallywag, she really can't help it. Though we don't blame you for baulking when she orders you to swab the deck, that's probably a good time to take to the streets for some trick-or-treating. When she asks for candy, the neighbors best answer with a swift, "Aye, Aye!".