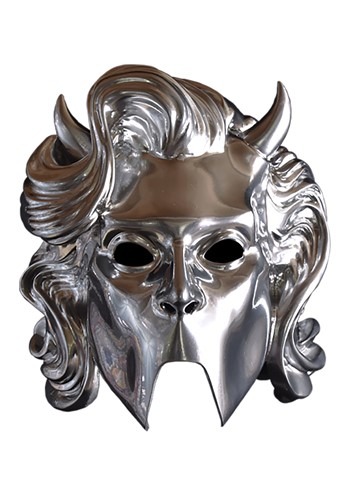 Can you imagine how much fun traveling on A Pale Tour Named Death would have been? Rocking out from somewhere as historic as London to the stages of Omaha, Nebraska to Mexico, Japan, and Switzerland, we can imagine the band saw some amazing crowds throughout their travels. Being part of those crowds, witnessing the raptor that Ghost creates is cool enough but the feeling of Ghost from the stage can only be felt from the few masked clergy members. Are you ready to see the world from the eyes of one of the Nameless ghouls? This mask is the first step!

This gorgeous, glossy mask is sculpted by Jerry Constantine, the artist that sculpts all the masks for the band. A mask from A Pale Tour Named Death, it will be instantly recognized from hard-core fans of the band! It's made of resin and has padding on the interior to make wearing the Ghoulette mask nice and comfortable, no matter how hard you're rocking out. The high-gloss chrome paint makes a stunning impression whether it's on your head or under the lights in your collection. As it comes in a full-color, display-ready box, this mask brings the Ghost-worthy drama as soon as it arrives at your door!

This mask is rad alone, but pair it with a black suit and you'll be ready to take the stage at your next costumed event! If you're looking to recreate the band's drama, you can also find the rest of the clergy in our costume collection. From all of the Papas zero to two to the three other Nameless Ghouls, and even Cardinal Copia, this mask can make sure that you're in good company! Now when you're listening to Meliora in your car or you're wearing this mask at a Halloween party, you can rock easy, knowing that you've seen the world through the chrome eyes of the clergy!