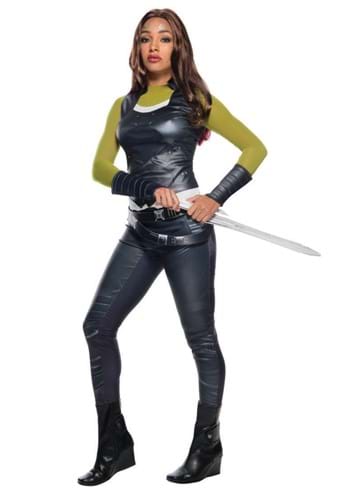 Star of the Show

When you signed up with the Guardians of the Galaxy, you thought that there would be a lot more heroics than there are. Sure, you have saved the galaxy several times from horrifying destruction, but most of the time you just chill out or commit petty theft. That is pretty fun, actually. Actually, maybe it would be better to be the bad guy!

You could swoop in on unsuspecting planets and fill your ship with loot before disappearing among the stars again. You would live in luxury and wealth as you and the rest of the crew took advantage of the helpless people of the galaxy! Well, that sounds kind of mean when you say it that way. You suppose that doing a little good and a little bad would be a pretty fun way to live!

Having the greatest style in the universe can be tough, someone’s got to do it! This Gamora Avengers Endgame Secret Wishes Costume has all the true-to-film details that will make you feel like the best warrior in the galaxy. The pants and shirt both fit snugly and flatteringly, just like Gamora in the movies. Foam bracers and an awesome belt complete the look with all the flair that you would expect of one of the Guardians of the Galaxy.

If you are looking for the perfect Gamora from the Guardians of the Galaxy costume, then you are in the right place! You will love exploring space and planets alike when you have this costume on. Just make sure you keep your friends close!