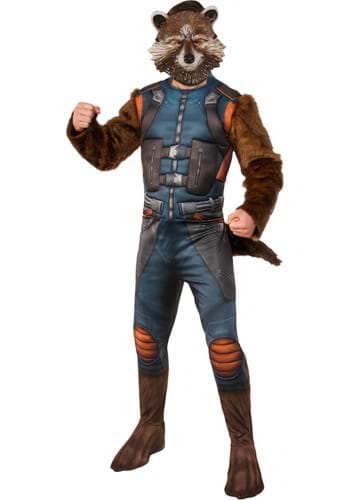 Rocket Raccoon isn’t your average raccoon, although he still might tip over your trash can if you happen to leave a tasty snack inside. He’s a gun-toting, foul mouthed, fast talking furball with a penchant for blowing stuff up and asking questions later. And you? Well, you’re not the average Joe just looking for an average costume, are you?

Well, we're here to let you know that we have you covered. This costume is anything but average, since it actually makes you look like a humanoid raccoon, just like your favorite member of the Guardians of the Galaxy. The main jumpsuit has faux fur sleeves, which make your arms look like the arms of a furry critter. The chest and leg portion of the jumpsuit have printed details that are designed to look like Rocket’s jumpsuit from the film. The back of the suit even has a faux fur tail attached to the back, since every raccoon, even one who loves to shoot guns at the bad guys, needs a fuzzy tail. Of course, the finishing touch to the costume is the molded mask. It fits with an elastic band and has Rocket’s smarmy face on the front.

Now, we do have to warn you that wearing this costume comes with great power and great responsibility. (Yeah we know, that's a Spidey thing, not a Guardians of the Galaxy thing.) Should any bad guys show up at your party, you will be expected to save the galaxy from imminent destruction! You'd better pack a few toy guns with you.