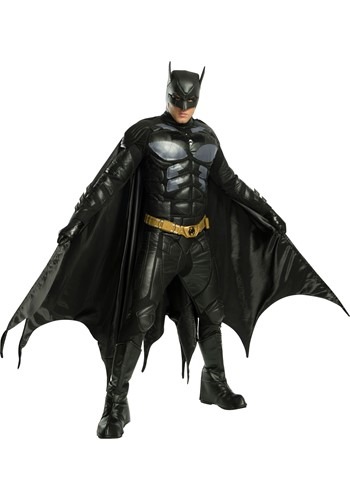 Everyone knows that the Joker constantly has his eye on conquering Gotham for himself. Who really knows why? Maybe he's a little grumpy about his low ranking in the deck. That's probably fair. The 'Joker' card is usually the one that doesn't offer many points in your average game. Some folks even throw it out entirely! No wonder he has his eyes set to move from Joker to the King of Gotham. There's only one problem with his plan.

While the Joker is trying to play cards, Batman is in his way and this genius detective was trained in more than just some martial combat in the midst of dark caves. While the Joker is tossing out cards, the Dark Knight is playing chess! It's too bad that so many villains in Gotham like to name themselves themed after games because nobody knows strategy quite like Batman. All you need to ensure you've got game, yourself, is an elaborate costume, too.

They say that the night is dark and full of terrifying things that go bump. But, when you're dressed up in this Dark Knight Batman costume, you're the one that will be giving people the shivers. This complete costume will give you the movie magic look of the Dark Knight, himself, from the cinematic DC universe... all with the shiny texture of faux leather! The cape has the iconic bat wing tips and the jumpsuit itself features 3D accents along the arms, legs, and on the chest. The utility belt and cowl complete your transformation. All you need next is to locate that darned Joker!

Whether you're conquering the supposed "King of Gotham" or even going after his Harley Quinn Queen, you're going to take over the night for sure. This complete Batman costume ensures that both Gotham and your own city streets are under your wing! In no time, this Knight of the Night will become the King!