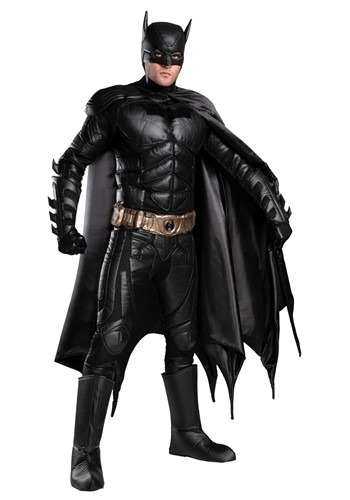 Take the Night by Flight

The image of a superhero soaring over the city is an iconic image that we can all understand. It can be inspiring to see the cape fluttering in the wind, to point up and gasp, wondering if that could be a plane or a bird. It's even more amazing when they make the rare move of bringing a citizen of the city into the sky to give them the same astounding view that they see every single day. Truly, this is what it means to be a superhero!

Of course, that image is just a bit different if you're talking about Batman. First, it is probably at night, so there aren't going to be too many people looking up. Those who are definitely aren't going to be mistaking this guy for a plane and everyone sure knows that it isn't birds that go flying around in the darkness. Yup, those are bats! And, naturally, if Batman is carrying anyone around while gliding over Gotham, that person is for sure a villain that's being tormented with the fear of falling hundreds of feet, so they're definitely screaming instead of taking in the view!

Now, we don't actually have gliding capabilities installed into the cape of this Dark Knight Batman costume, but you'll be able to channel the same individual style that only Batman can bear! This costume features a jumpsuit that zips up the back and a plastic-reinforced cape that maintains its structure (so you can pretend you're about to glide away). Foam-backed accessories finish your look, including a cowl, boot covers, and faux leather gloves. Officially licensed from The Dark Knight movies, we're sure this Batman costume will give you the signature style you're looking for.

A Gothic Trip for Two?

It's hard to be a Dark Knight all on your own. Now, naturally, this epic adult Dark Knight Batman costume is going to make all of your heroics pretty fantastic. But, join up with another to create a fantastic Dynamic Duo or go head to head with your favorite villain. After all, what's the point of soaring through Gotham if you're not putting the fear of justice to anyone!?

Please reference the sizing chart to see what size would fit you best. Another helpful tool is the costume sizing page. https://support.halloweencostumes.com/kb/a63/sizing-for-costumes.aspx?ogid=5f1e846d-d364-4bd5-a89c-b7f1172a8e16&DomainProjectID=13&ReturnUrl=https://www.halloweencostumes.com/dark-knight-adult-batman-costume.html
Answer
Ask a Question
Reviews
5
(6 Reviews)
5 Stars
100%
4 Stars
0%
3 Stars
0%
2 Stars
0%
1 Stars
0%
Write A Review
Sort By Most Helpful
Filter By All Ratings