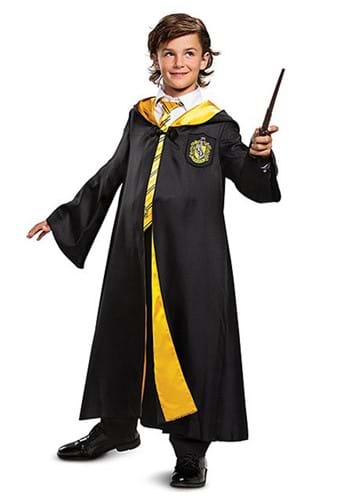 Your child has been thinking really hard about the perfect Halloween costume. They have poured hard work and dedication into the decision, trying to think of how to show their identity in a cool way without being too showy. Well, it sounds like your kiddo has a lot of traits of a loyal and loveable Hufflepuff, and that's precisely why they've landed on this awesome Kid's Harry Potter Hufflepuff Robe Costume!

In it, they can finally belong to the magical world of Harry Potter! Watch their imagination come to life as your little witch or wizard transforms into a lover of magical creatures, a loyal friend, and a patient student of the magical world, ready to hop the Hogwarts Express and head off to their first year sorting ceremony. There's no question in their mind which house table they'll be sitting at by day's end, so this yellow and black homage to Hufflepuff glory is a no-brainer!

An officially licensed Hogwarts robe can be incredibly hard to come by, especially for a little muggle. But this costume makes the whole look come together, instantly. How magical! It's a long black robe with a single closure at the front, bell sleeves, and an oversized hood, lined with yellow satin. Don't forget to let your little magic maker stop by Ollivander's for a wand before they depart. No witch or wizard can be without one.