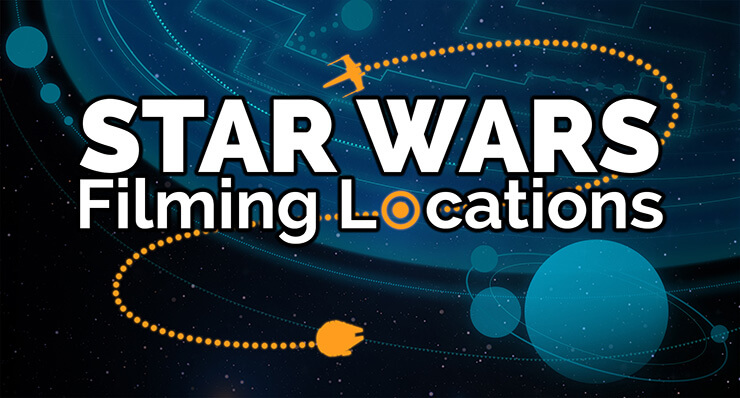 How do you create a place that doesn’t exist? That was the challenge by George Lucas, JJ Abrams, and company in filming the Star Wars saga. Several filming locations were filmed and set pieces were built to create the atmosphere of planets in a far away galaxy. The deserts of Tatooine can be found in both Tunisia and the US, the ice planet of Hoth was actually a glacier in Norway, and even the resistance air base on D’Qar is a real air force base found in the UK. Star Wars filming locations can found all over the map, and most can even be visited.

While plenty of filming took place in the studio, the original trilogy, the prequel trilogy, and Episode VII all benefited from location shots. The original trilogy didn’t have the technological advancements or budget available like the newer films, so the choice was more out of necessity. However, by Return of the Jedi, it became more difficult to film without fans flocking to see the action. The prequels (for better or worse) used green screen technology, but the filmmakers were able to shoot real scenery to use in the backdrops. They still shot some scenes on location, but by shooting in studio, they were able to avoid the crowds of onlookers, not disturb some of the historic locations used, and take advantage of the current technology at the time. For The Force Awakens, most location filming either took place in secret or under maximum security to avoid crazed fans. Seriously, there were people flying drones over the set trying to get pictures! It’ll be interesting to see how they handle filming for future Star Wars films. For now, take a planet-by-planet look through all the filming locations used for Star Wars Episodes I-VII in our latest infographic.

The many locations in the Star Wars saga may be imagined to be in a galaxy far, far away, but the reality of the matter is that all those planets are based on or were actually shot in real locations here on Earth. While some planets were created entirely in a studio, many landscapes and set pieces were filmed on location. From core worlds like Coruscant all the was to Luke Skywalker's secret hiding place on Ahch-To, travel the globe as we take a look at all the filming locations from the Star Wars films.

Do you plan on visiting any of these locations? What's your favorite Star Wars planet? We think Naboo looks like an ideal location as opposed to the extreme heat of Mustafar or the blistering cold of Hoth. If you're planning on visiting any of the Star Wars filming locations, be sure to pick up some awesome Star Wars costumes and accessories so you can enjoy a lightsaber battle in the same places as they took place in the movie!