The Galaxy Far, Far Away: A Tour of the Star Wars Universe [Infographic] 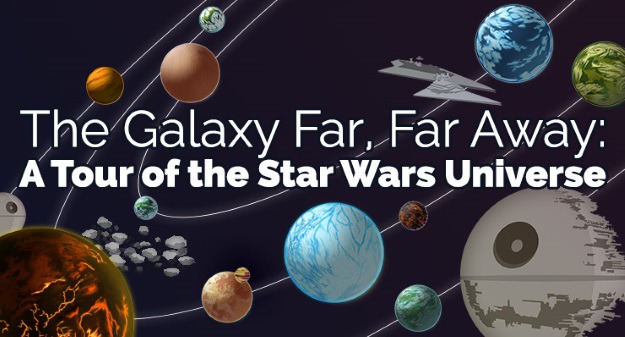 The main Star Wars galaxy was much like our own Milky Way: one hundred-thousand light years across with hundreds of millions of stars. And also like ours, many of those stars had planetary systems, some habitable or otherwise useful. (Mining natural resources, for example, or hiding children from their Sith Lord fathers.) You may know them from the original trilogy, the prequel trilogy, or even the new Battlefront video game. So without further a-dewback - yes, that happened - let’s travel from the Core World of Coruscant through the most iconic Mid Rim and Outer Rim planets!

The Galaxy Far, Far Away: A Tour of the Star Wars Universe Transcript

The Star Wars galaxy contained hundreds of millions of stars, many with their own habitable planetary systems. At the center of civilization was Coruscant and the core worlds, where the Galactic Republic was founded. Outside this was the Mid Rim, and then the Outer Rim Territories on the edge of unexplored space. Get on board as we explore the most iconic locations in the Star Wars universe, from Coruscant to beyond!

Coruscant is considered the political center of the galaxy. It was once home to a Sith shrine, then the Jedi Temple, and subsequent warring between the two factions. Coruscant effectively became one large city, extending thousands of levels into the atmosphere. It is home to the Galactic Senate and the Supreme Chancellor.

The remains of the planet Alderaan, destroyed during the Galactic Civil War.

Kashyyyk is a densely-populated forest planet with three moons in the Southwestern quadrant of the Mid Rim. The native Wookiee harvest Wroshyr trees for their homes and weapons, and refine Kashyyyk oil for fuel. The Galactic Republic had long used Kashyyyk as a navigational point, though the Galactic Empire blockaded the planet after enslaving the Wookiees.

Naboo is a small, peaceful planet in the Chommell system in the Mid Rim, near the border of the Outer Rim Territories. The Gungans are native to the planet, though human colonists from the planet Grizmallt have lived there for centuries. Naboo's porous crust contains plasma, which is used in lightsaber blades, among other weapons and vehicles.

Bespin is a gas giant in the Anoat sector of the Outer Rim Territories. Its atmosphere contains the rare Tibanna gas, which is used in blasters and hyperdrive coolant. Cloud City floats in a thin layer of breathable atmosphere, mining and refining the gas. The Bespin system is, galactically speaking, near the Hoth system, separated by the Anoat system.

Hoth is a desolate, frozen planet in the Anoat sector. it has three moons and is the sixth planet from its star, distant enough to remain virtually uninhabitable year-round. Hoth was the site of Echo Base, where the Rebel Alliance regrouped after the Battle of Yavin. The Hoth system is relatively close to the Bespin system.

Endor, often called the Forest Moon of Endor, is a small moon orbiting a planet—also called Endor—in the binary star system of Endor I and Endor II. It was the site of the Death Star II and its shield generator, both of which were destroyed in the Battle of Endor. Prior to these events, the moon was only known for its native Ewoks, source of the popular Ewok Jerky eaten throughout the Outer Rim Territories.

*The Death Star II was destroyed during the Battle of Endor.

Sullust is a hostile planet in the Outer Rim Territories, with numerous volcanoes and a partially molten surface. The Battle of Sullust was fought there during the Clone Wars, and the planet was later used by the Alliance to restore the Republic as they prepared for the Battle of Endor.

Mon Cala is a water planet in the Calamari sector of the Outer Rim Territories. Both the native Mon Calamari and Quarren live peacefully in mutual self-respect, though that peace was briefly broken during the Clone Wars, resulting in the Battle of Mon Cala.

Yavin 4 is the fourth moon of the red gas giant Yavin. For a time, the Alliance to restore the Republic had a secret headquarters there. After destroying the first Death Star in the battle of Yavin, they relocated to Hoth. Thousands of years previously, a warrior race known as the Massassi lived on Yavin 4, but were enslaved by the Sith and went extinct.

*The Death Star was destroyed in the Battle of Yavin.

Tatooine is a desolate desert planet in the Arkanis sector of the Outer Rim Territories. Luke Skywalker grew up on Tatooine, and both Obi-Wan Kenobi and Jabba the Hutt settled there after mastering their respective crafts. Most inhabitants of Tatooine live at moisture farms, though there are a handful of port cities, including Mos Eisley and Mos Espa.

*In an unnamed system in the Arkanis sector, the "Sentinel Moon" was used as a staging area during the construction area of the first Death Star.

Rodia is a humid jungle planet in the Outer Rim Territories. Cities are domed to keep out pirates, native creatures, and the hostile environment. Luke Skywalker was sent to Rodia after the Battle of Yavin, and gained insight about his Jedi powers and lightsaber construction.

Jakku is an arid frontier planet in the Outer Rim Territories. It is home to sporadic mining operations and Knockback Nectar distilleries as well as outlaws and scavengers. The Battle of Jakku took place above the planet, and ended with a Star Destroyer crashing into the surface of Jakku.

Which planet was your favorite? If you could live on one of these planets (or any other planet in the Star Wars universe), where would it be? Let us know in the comments below. And remember that we have literally hundreds of Star Wars costumes! Not as many as there are stars in the universe, but hey, we’ve got a lot of them, okay!