Making Mario: The Creation and Evolution of Mario [Infographic] 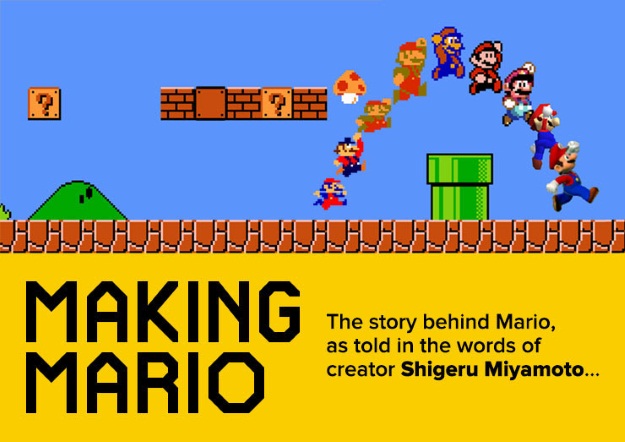 Mario has a lot to brag about - appearing in more than 200 video games, being the titular character of the bestselling video game franchise of all time, not to mention sporting a killer mustache "before it was cool." The latest feather in Mario's cap will be the release of his newest game, Super Mario Maker, which is set to be released this Friday, September 11! But was Mario always the king of the gaming scene? Was there a time he didn't wear that signature red cap? What does a Mario evolution look like? What was with that one time he was a Doctor - does he even have a license to practice medicine?

We could take a stab at answering these questions ourselves, but why, when Mario creator Shigeru Miyamoto himself has been so forthcoming with information! In his own words, with our own illustrations, here is the story behind your favorite princess-rescuing plumber.

Making Mario: The Creation and Evolution of Mario Transcription

The story behind Mario, as told in the words of creator Shigeru Miyamoto...

In Japan, Mario was originally known as Jumpman.

"Well, I call him 'Mr. Video'. My plan was to use the same character in every video game I made."

"Someone at Nintendo of America actually came up with the name Mario."

"I saw the way that Mickey had evolved, so we decided that Mario was going to be a character who would evolve and change with the advances in digital technology."

"Originally, ever since we made Donkey Kong, on many occasions I had done rough sketches of Mario in pencil and then given them to an illustrator to polish up."

"If you're familiar with things like Popeye and some of the old comic characters, you would oftentimes see this cast of characters that takes on different roles depending on the comic or cartoon."

"So, to a certain degree, I look at our characters in a similar way and feel that they can take on different roles in different games."

"There's only one rule in terms of the things that Mario does. Generally, it's that he's more on the blue-collar side."

"Perhaps the Dr. Mario you're thinking of was maybe, in some way, not necessarily legitimate."

Even though 'technological limitations' were originally what dictated Mario's exaggerated features like his big old shnoz, can you imagine it any other way? Everything about Mario from head to toe has become iconic over his thirty-plus year history, but it sure was interesting to read how his famous features became...well...famous, wasn't it?

If you can't get enough Mario Mania and are planning to be one of the first to get your hands on Super Mario Maker this Friday, we have hundreds of Super Mario Bros costumes and accessories to help satisfy your need this Halloween! You could add a tool belt and hard hat, and go as Super Mario Maker Mario! Or you could dive even deeper into geekery and go as "Skinny Mario!" (Feel free to rant about Skinny Mario in the comment section below...)