12 Women in Comics Who Kick Butt 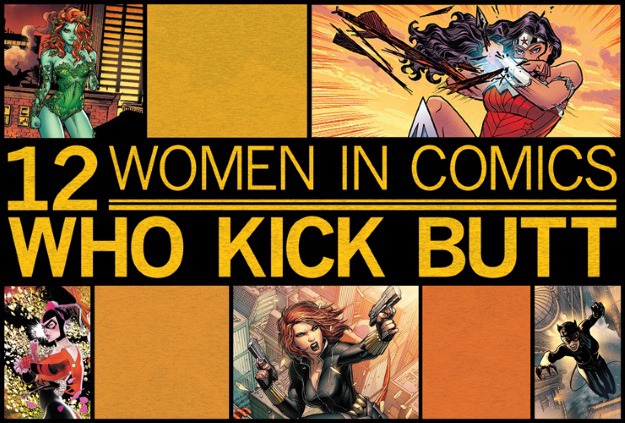 There have been several strong female characters in comic books for more than 50 years, but they just haven't gotten the same love as their male counterparts. The fact that Wonder Woman debuted in Comics in 1941 and won't have her own feature film in theaters until 2018 is downright ridiculous. She will, however, be making her big screen debut in 2016's Batman v Superman: Dawn of Justice and this has been generating some hype around women superheroes and women characters from comics in general. With all the buzz surrounding Wonder Woman and Harley Quinn appearing in upcoming films, here's a look at 12 awesome women from comics and what they've been up to in film.

Wonder Woman, aka Princess Diana of Themyscira, is the first lady of women in comics. She's not only one of the most powerful female superheroes, she's one of the most powerful of all superheroes! Armed with God-like power and weapons including the lasso of truth and bracelets of submission, among others, Wonder Woman is a pure force! Although she's had several origins during her 74 years of existence, Wonder Woman was originally a member of an Amazon tribe who comes to America and commonly fights against Nazi forces. Other origin stories draw stronger ties to her powers coming from the Gods. Wherever she came from, many are excited for her to show up in next year's Batman V Superman: Dawn of Justice. 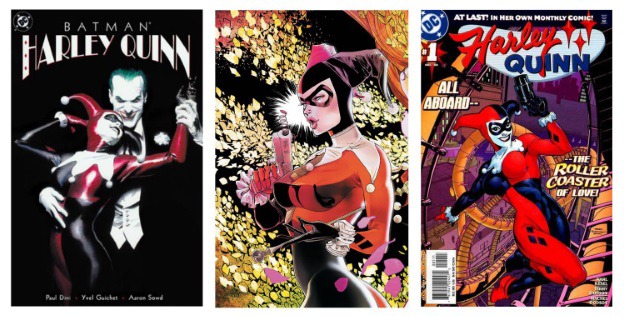 If Wonder Woman is the first lady of superheroes, Harley Quinn is the Queen of madness on the dark side. Prior to going crazy, she was Dr. Harleen Quinzel, a psychiatrist at Arkam Asylum until she fell for one of her patients, The Joker (heard of him?), and became his accomplice/girlfriend. She initially helps the Joker escape from the asylum, but when he returns after being badly beaten by Batman, she gets pushed over the edge. Harley is a skilled gymnast, trained psychiatrist, and is typically armed with her signature mallet or baseball bat. She's most commonly dressed in some variation of a black and red jester costume, but Harley has quite a different look for when she makes her debut on the big screen next summer in Suicide Squad - more details here! 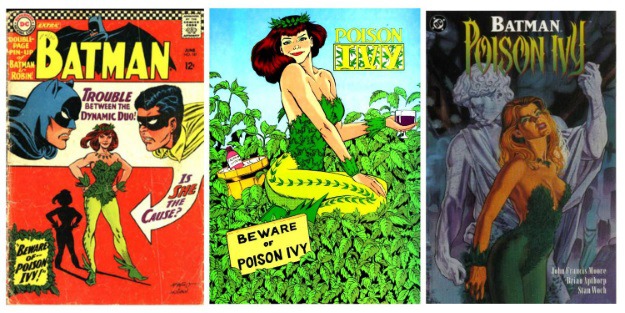 Poison Ivy might be one of Batman’s most powerful and deadly foes. She actually killed Batman once with a poisonous kiss (only to bring him back to life with a second kiss which provided the antidote). Poison Ivy’s real name is Pamela Lillian Isley. She’s a botanist who survives a murder attempt in which she was exposed to poisonous herbs from an ancient Egyptian artifact. Following the incident, she discovers her immunity to all natural toxins and diseases. It’s also commonly known that Poison Ivy is able to control plant life. She’s had many looks over the years, but one thing has been pretty consistent: Poison Ivy wears green. While she has made an appearance on the big screen before, there are currently no plans in place to see her again in the foreseeable future. 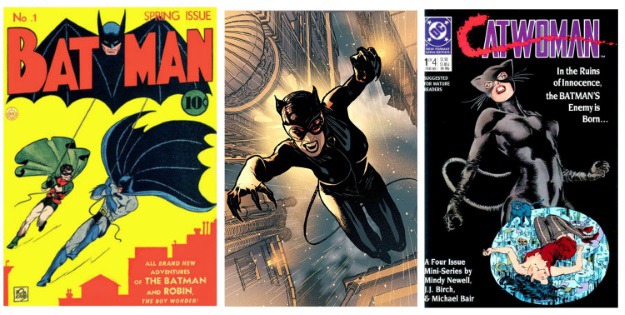 If the Joker and Harley Quinn are the ultimate love-hate relationship, Batman and Catwoman are not too far behind. Another Batman adversary of the caped crusader, Catwoman has been prowling the streets of Gotham City since 1940 when she first appeared in Batman #1. Early on she was known as the Cat, an expert burglar who consistently eluded the dark knight. It’s later revealed in her original storyline that she’s a former flight attendant suffering from amnesia who turned to crime after surviving a plane crash. What makes Catwoman unique is that she doesn’t possess any powers. She’s just a really good thief who uses all sorts of gadgets and fighting abilities, kind of like Batman (minus the thieving, of course). With exception of members of the x-men, she’s probably been portrayed in movies more than any other woman in comics. She was most prominently portrayed by Michelle Pfeiffer in 1992's Batman Returns and by Halle Barry in the forgettable 2004 movie, Catwoman.

Anybody who’s seen Black Widow in any of Marvel’s movies (namely The Avengers movies and Captain America: The Winter Soldier) knows how much she kicks butt. However, some of you may not know that the Russian spy was once an antagonist to Tony Stark (Iron Man) before jumping ship and joining up with the Avengers. After several failed attempts at infiltrating Stark Industries, she fled her country, teamed up with Hawkeye, and came to America, where she would eventually be part of S.H.I.E.L.D and the Avengers. Scarlett Johanson plays Black Widow in the Marvel Cinematic Universe and has appeared in Iron Man 2, The Avengers, Captain America: The Winter Soldier, and Avengers: Age of Ultron. She will appear in Captain America: Civil War next year.

Jean Grey is the original X-men’s sole female member and also one of the most powerful mutants of the comic book world. She’s most commonly referred to as Jean Grey, but she debuted as Marvel Girl with the X-men and possess powers of telepathy and telekinesis. Her most famous storyline comes from the mid-to-late 70's when she acquired god-like powers after being exposed to radiation while trying to save her fellow mutants. Under her new codename, The Phoenix, Grey is driven mad by her powers and eventually commits suicide to protect the X-men and the world from her. Jean Grey had been played by Famke Janssen in previous X-men films, but Sophie Turner will be taking over the role in 2016's X-Men: Apocalypse. 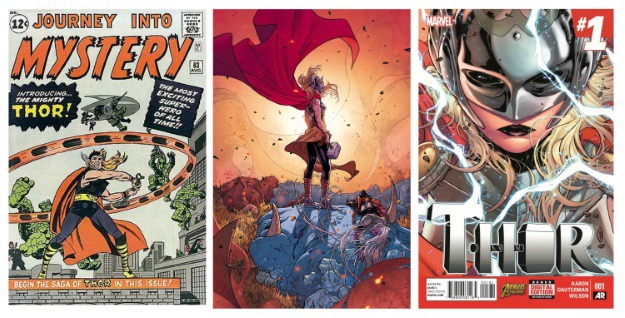 No, you didn’t misread that. Thor is, in fact, female in the comics now. Deal with it. Thor is widely recognized as the God of Thunder. He gets his powers from his magic hammer, Mjolnir, on which it is inscribed, “Whosoever holds this hammer, if he be worthy, shall possess the power of Thor.” After becoming unworthy and losing the ability to wield Mjolnir, Thor relinquishes his power to the mysterious woman who is able to pick it up. He even gave up his name to the woman, who is later revealed to be former love interest Jane Foster, and now goes by Odinson. The female Thor comic launched in 2014 and as of right now, there are no knowns plans for Marvel to have Natalie Portman’s Jane Foster take over for Chris Hemsworth’s Thor in the cinematic universe. 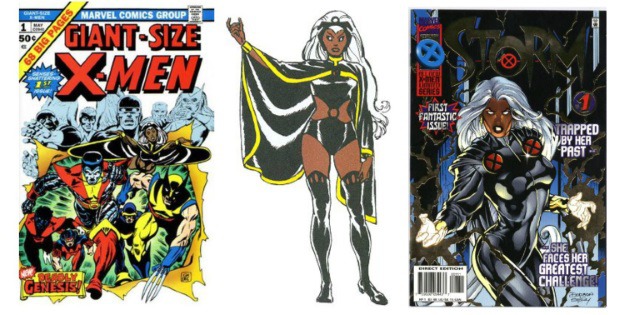 With the powers of flight and the ability to control the weather, Storm can cause some serious damage. Most commonly known as a member of the X-men, Storm made her comic debut with the team in 1975 sporting her original black costume with cape, and signature white hair. Her real name is Ororo Munroe. She was orphaned at a young age and grew up a thief living on the streets of Cairo, Egypt. One of the men she pick-pocketed happened to be Professor Charles Xavier, who later would recruit her into the X-Men. Since the first X-Men movie in 2000, storm has been portrayed on-screen by Halle Berry, but will be replaced by Alexandra Shipp as part of the “rebooted” younger cast in X-Men: Apocalypse in 2016. 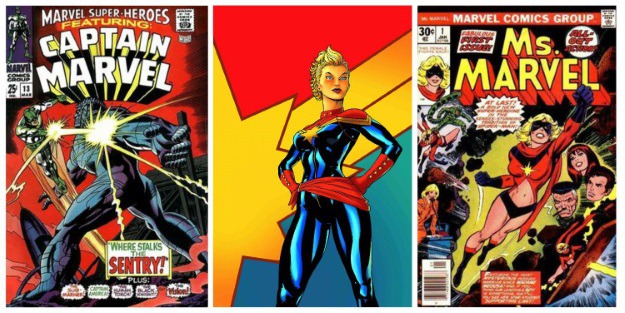 Carol Danvers is a woman with many powers and many names. She debuted as the first incarnation of Ms. Marvel, but has also been known as Binary, Warbird, and Captain Marvel. Danvers was the head of security for NASA when she was involved in an incident with alien technology that ultimately resulted in her gaining her superhuman powers. Before working with and joining the Avengers, Ms. Marvel had teamed up with Spider-Man, Iron Man, and the Defenders. A Captain Marvel movie featuring Carol Danvers has been confirmed for 2018, but there hasn't been anyone cast for the role yet. 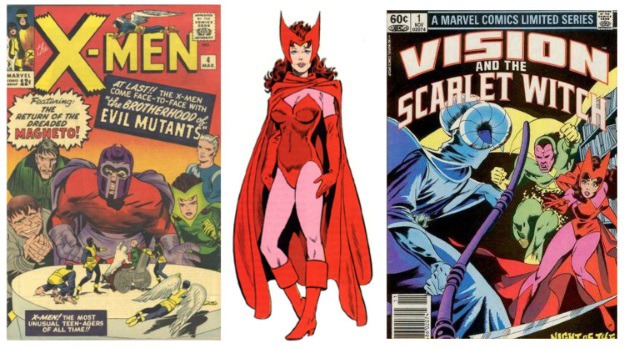 Scarlet Witch, or Wanda Maximoff, was abducted along with her brother and experimented on as a baby. She is the daughter of X-men supervillain Magneto, who recruits her into the Brotherhood of Evil Mutants. The main component to Scarlet Witch's powers involve mind control. She’s able to get into people’s minds (figuratively) and alter reality to make people hallucinate. Another baddie turned goodie on this list, Scarlet Witch first appeared as a villain in early X-men comics before joining the Avengers. Scarlet Witch was played by Elizabeth Olsen in Avengers: Age of Ultron this year and is set to return in Captain America: Civil War in 2016. 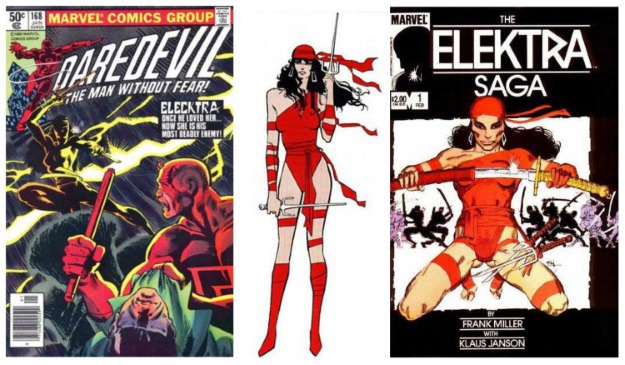 Some of the women on this list are skilled fighters, but Elektra Natchios is a trained assassin. She grew up training in martial arts, and after her father was killed, went on to train with the organizations Chaste and The Hand. While working as a bounty for hire in New York, she crosses paths with former love interest Matt Murdock, aka Daredevil. The two then team up to take down organized crime in the city. On the big screen, Jennifer Garner first wore the red Elektra costume in the 2003 film, Daredevil, starring Ben Affleck. In 2005, a movie featuring Elektra was released and remains one of the worst-reviewed superhero movies of all time. There are currently no plans to bring her back in films, but Elodie Yung has been cast for the role in Season Two of the popular Netflix series, Daredevil. 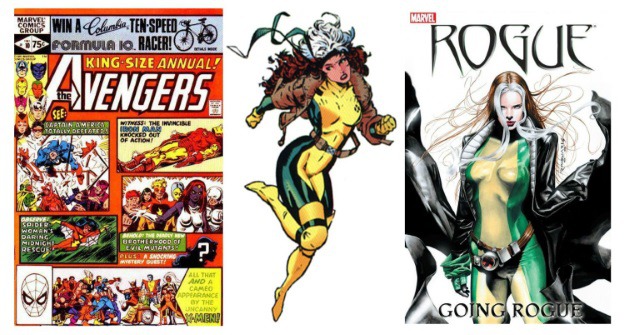 Rogue is most commonly known for her role in the X-men. She is a mutant born with the powers to absorb others' powers, skills, and memories, just by touching them. Feeling that her powers are a curse to her, she ran away from home at a young age. She was then adopted by evil mutant Mystique and grew up as a villain. After so long, Rogue began to fear for herself and worried she was getting lost among all the memories from others she had absorbed. She then went to Professor Charles Xavier, who invited her into his school for gifted youngsters. There, she joined up with the X-men despite having fought with them before. Anna Paquin starred as Rogue in the first three X-men films from 2000-2006 before reprising the role in 2014's X-Men: Days of Future Past. Although most of her scenes were cut from the film, a director's cut (known as The Rogue Cut) was released in July 2015.

Who are some of  your favorite women from comics? Who are you excited to see on the big screen? Are there any female characters you think should show up in the movies sooner rather than later? We're partial to the Unbeatable Squirrel Girl, but not so sure the general public is ready for her yet. If you're a fan of their looks, and might want to channel one of these powerful women this Halloween, be sure to check out our selection of female superhero costumes!