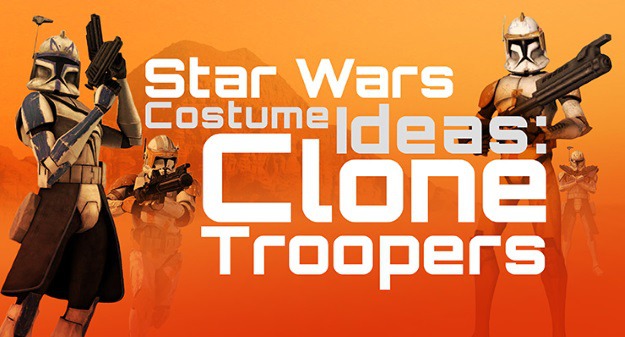 Legendary Jedi heroes Anakin Skywalker and Obi-Wan Kenobi are renowned for their roles in The Clone Wars, and for Anakin’s transformation into Darth Vader. Less renown, though arguably as important, are the Clone Troopers and officers who helped these Jedi find success in the war. The clones from Attack of the Clones, Revenge of the Sith, and The Clone Wars T.V. show, offer up the perfect companion costumes for those who don’t want to dress as Lightsaber-wielding Jedi or Sith. If you’re more comfortable with a Blaster than a Lightsaber, consider these Clone Wars heroes for your next Star Wars themed costume! 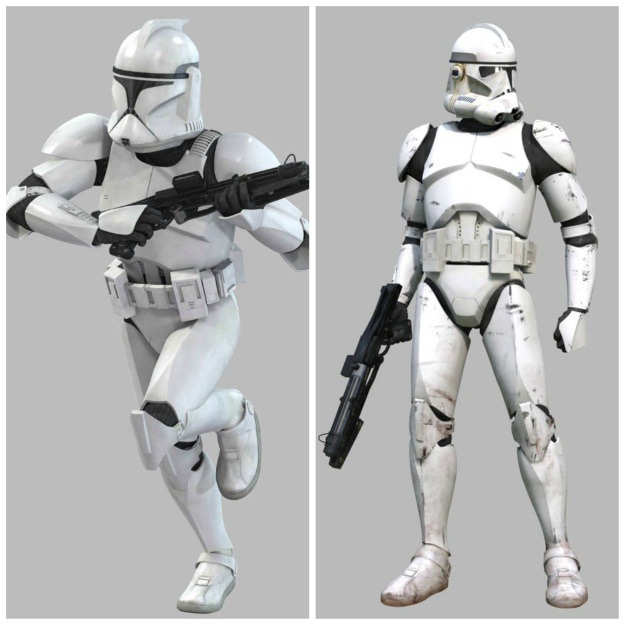 Considering that there were thousands of clones created during the Clone Wars, there is the option of dressing as one of the standard grunt troopers from the Grand Army of the Republic. These grunts were usually fresh from training and normally had no name designation; instead, they identified themselves with a number. Their armor was standard issue, and if it bore any coloring at all it was generally that of their unit (the 501st used blue coloring for example). Do you have a group of friends looking for a great group Star Wars costume idea? Consider using combinations of grunt troopers and officers to form your own squad! 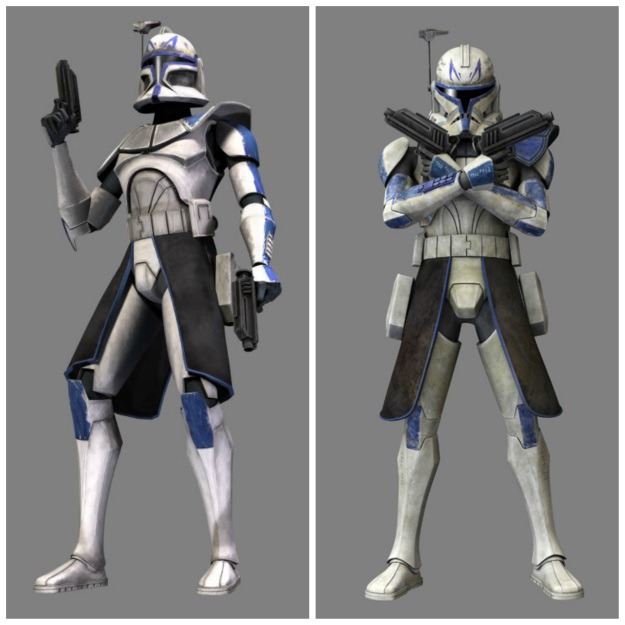 Captain Rex was one of the most influential members of the Grand Army of the Republic and one of the main characters in The Clone Wars television show. Acting as commanding officer to General Anakin Skywalker, Rex participated in many of the most pivotal battles of the Clone Wars and always came out on top. Rex was outfitted with custom armor that featured the white/blue colors of his unit, the legendary 501st Legion. His armor featured the traditional Mandalorian Jaig (the symbols above his visor, pictured above), a ‘kama’ armored kilt, and a rangefinder built into the helmet. Similar to Jango Fett, the bounty hunter he was cloned from, Rex preferred to use his twin DC-17 hand blasters in place of the standard issue DC-15A assault rifle. 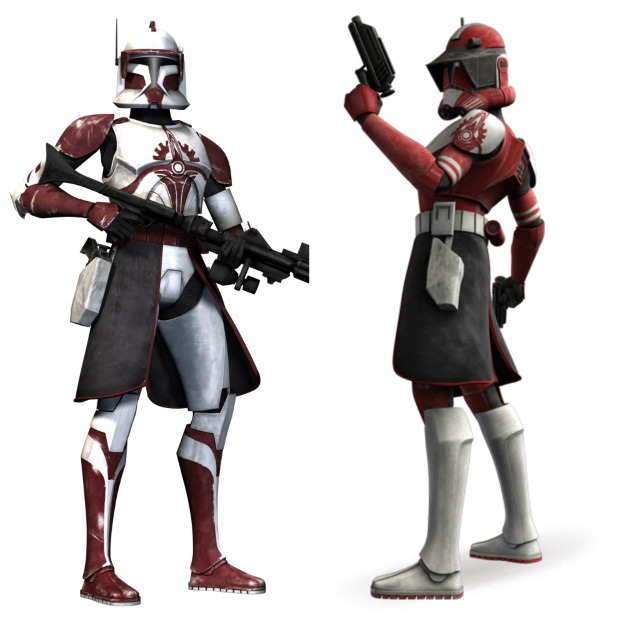 Commander Fox is the no nonsense head of the "Shock Troopers" in charge of security for the Galactic Senate and Supreme Chancellor Palpatine. Known officially as the Coruscant Guard, the famed Fox and his squad were involved in many conflicts including the capture of Ziro the Hutt. Fox also lead the troopers in their confrontation with bounty hunter Cad Bane. Commander Fox wears the standard configuration of Phase I and Phase II Clone Trooper armor with additional communication and tactical improvements. His gear included both the DC-15A rifle and the DC-17 hand blasters located in his armored kama. Commander Fox’s armor was painted the crimson coloring of the Coruscant Guard. 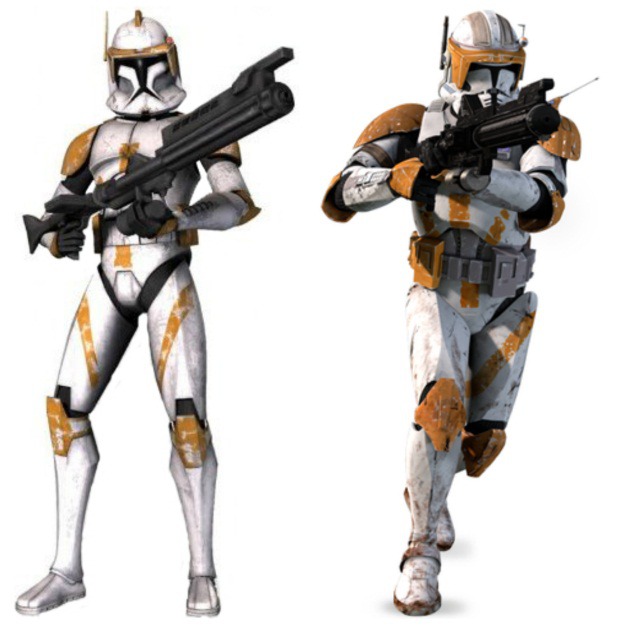 Commander Cody was the clone marshal commander in charge of the 212th attack battalion alongside legendary Jedi General Obi-Wan Kenobi. Similar to the relationship between Captain Rex and General Anakin Skywalker, Cody and Kenobi formed a bond that made them even better soldiers. Ever the servant of the Republic, however, Cody betrayed Kenobi after the issuing of Order 66. Commander Cody is often seen equipped with standard commander-type Phase I and Phase II armor, including a built-in range finder, communications antenna, blaster rifle, and an equipment pack. Cody’s armor was colored yellow-orange to signify his ranking as marshal commander. 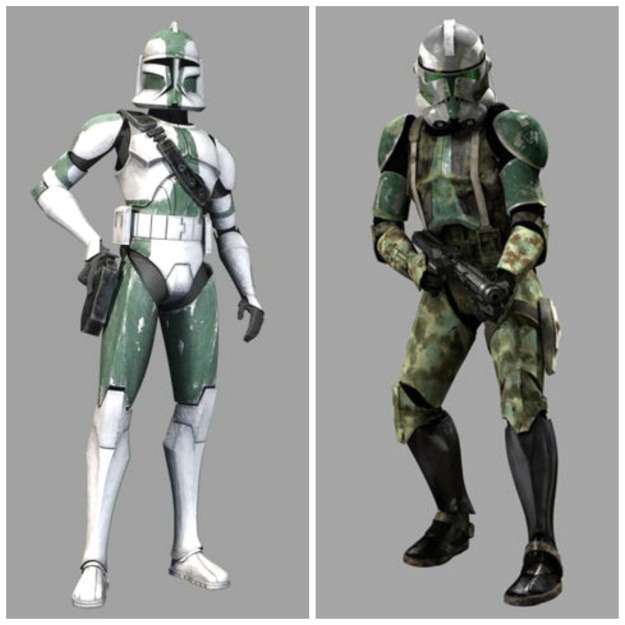 Commander Gree is an alien species specialist in command of the 41st Elite Corps, led by Jedi Luminara Unduli. Gree would also go on to serve on the Wookiee homeworld of Kashyyyk in the closing days of the Clone Wars, alongside Jedi Master Yoda. It was here that he met his end at the hands of Yoda after he and another trooper attempted to kill Master Yoda upon receiving Order 66 from Chancellor Palpatine. Commander Gree’s equipment included a black bandolier he wore across his chest, and standard Phase I and Phase II armor, colored green for his unit designation. Gree used a camouflaged variant of his Phase II armor on Kashyyyk. 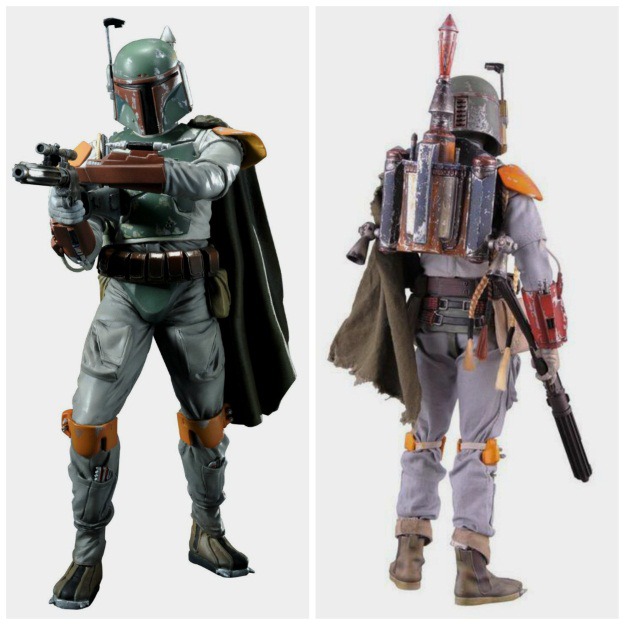 Boba Fett is a clone, though unaltered like his clone trooper brothers, and one of the most infamous characters from the Star Wars universe. When Jango Fett agreed to become the template for the Clone Army, a portion of his payment was one unaltered clone. He named the clone Boba and raised him as his son, teaching him everything he knew. After witnessing his father's death at the hands of Mace Windu, Boba would go on to become an infamous bounty hunter in his own right. In adulthood, Boba became one of the most successful bounty hunters in the galaxy, even coming under the employment of the Galactic Empire and Darth Vader. Boba Fett wore traditional Mandalorian armor similar to his father’s. The armor included a rocket launching jetpack, flamethrower, dart-firing gauntlets, a disintegration rifle, blaster pistol, concussion grenade launcher, and HUD equipped helmet. 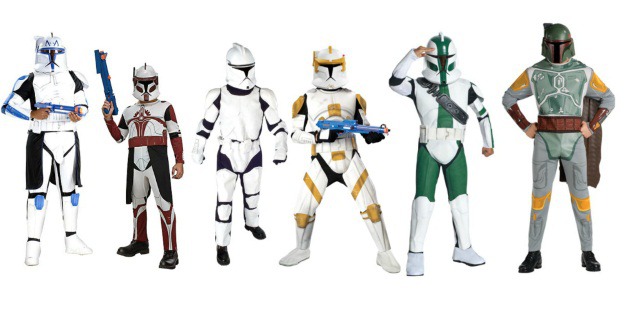 Did we properly equip you for your upcoming Halloween celebrations? Have you ever made any custom clone troopers? When many people think of Star Wars costumes, their minds fall to Lightsaber-brandishing Jedi, but there are so many other options out there. The Clone Troopers from the prequel trilogy are several of the many options. With a universe as rich as Star Wars, one that is about to get even more diverse with Star Wars Episode VII: The Force Awakens, Star Wars costumes are not going away any time soon. You can sift through our full selection of Star Wars costumes.

If you want to explore how these clone soldiers are related to the Stormtroopers of the original trilogy and beyond, check out our infographic highlighting the Evolution of the Stormtrooper Helmet!