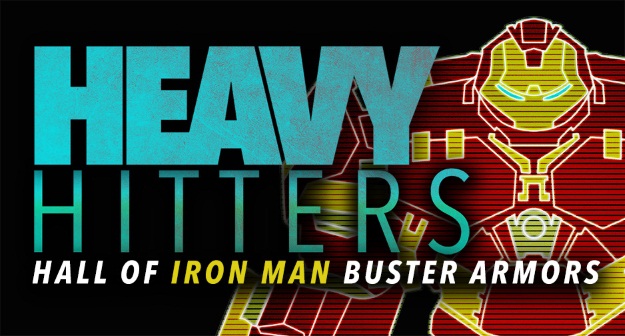 May 2015, The Avengers take to the silver screen for the second time in Marvel's Avengers: Age of Ultron. All of the Avengers return with new toys and upgrades from the previous films, courtesy of Tony Stark- and none of those upgrades are more prevalent than Iron Man's Hulkbuster Armor. Featured in many of the previews for the film, this titantic armor is designed by Bruce Banner and Tony Stark to subdue Banner's alter-ego The Hulk. In the comics, Stark has a long history of building armors to speficially combat some of the Marvel Universe's most powerful friends and foes, and most of these armors are huge, powerful, and come with plenty of firepower. In celebration of the return of Earth's Mightest Heroes to the big screen, we wanted to take a look back at the Busters Iron Man has used in his career.

Iron Man always has the right tools for the job. Over his long history, he has been tasked with fighting some of the Marvel Universe's most powerful foes (and sometimes, his most powerful allies). When battling a particularly stubborn or difficult foe, Iron Man brings out the big guns in the form of his Buster Armors. Named for the first version, which was created to battle the Hulk- the Hulkbuster- these super-armors are a fan favorite. This collection showcases the different versions of 'Buster' armors that Stark has used when battling the likes of Thor, The Hulk, and more.

Use: Designed as Countermeasure to Hulk's rampages.

Info: This version of the Hulkbuster was designed by both Tony Stark and Bruce Banner. The armor remains in orbit over Bruce Banner, allowing for rapid deployment. The buster armor fits over Stark's standard Iron Man armor. The armor is also able to detach damaged parts to be replaced mid-battle.

Use: Designed to take on The Hulk

Info: An armor-exoskeleton that fit over the normal Iron Man armor. The Hulkbuster MK. I. was equipped with 'magno-hydraulic-psuedo-musculature' which enhanced Iron Man's strength allowing him to lift a maximum of 175 tons. Special sensors were also included to detect Gamma Radiation.

Use: Used to battle the Hulk after he returned from exile in outer space.

Info: The armor used rocket boosters to increase punching power. It was originally equipped with anti-gammananites that were later found to be sabotaged. The armor was disabled when Stark Tower collapsed on top of it.

Use: Used to battle the Hulk after he returned from exile in outer space.

Info: The armor used rocket boosters to increase punching power. It was originally equipped with anti-gammananites that were later found to be sabotaged. The armor was disabled when Stark Tower collapsed on top of it.

Use: Originally designed to study Asgardian energy, Stark would use the armor to battle Thor.

Info: The armor was modeled after Thor's longtime adversary The Destroyer. Powered by an Asgardian crystal that was meant to solve the Earth's energy issues, the armor was impervious to nearly all types of damage-save to those of Asgardian origin.

Use: Designed and deployed to defeat the Pheonix Force before it arrived on Earth.

Info: Tony created this armor as soon as the Avengers learned that the Pheonix Force was returning to Earth. He successfully intercepted the Force before it arrived on earth. instead of defeating it, he splintered it into five parts which each possessed one of the X-Men nearby.

Use: Originally designed to do battle with The Hulk.

Info: When A.I.M. recreated the Extremis Virus Stark used this armor to hunt down any trace of the new virus worldwide, including Extremis Superhumans. This armor was used for its heavy weapons, including a mini-gun, cannon, laser, additional mini-gun mounted to the shoulder, repulsors, and his Unibeam.

Use: Created by Tony after his defeat of Galactus.

Info: Little is known about this titanic and immensely powerful armor. It was created to go toe-to-toe with Galactus, one of the most powerful beings in the Marvel Universe. The Galactus Buster Armor will be featured in the Iron Man portion of the Secret Wars event, The Armor Wars.

Sizing up the Buster Armors

Talk about heavy metal, Tony sure has quite the set of buster armors- and in all shapes and sizes. We can't wait to see the Hulkbuster in action, and fully expect it to be one of the highlights of Age of Ultron. Which buster armor was your favorite? While you get all hyped up for the premiere, get ready to show off your own super-suit by shopping our selection of Age of Ultron Costumes!