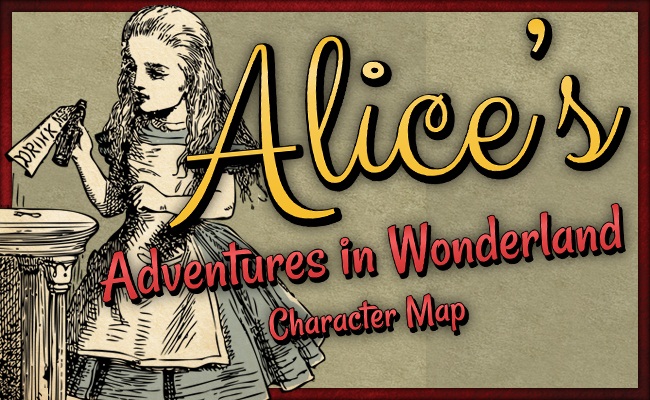 Lewis Carroll's fictional masterpiece "Alice's Adventures in Wonderland" has penetrated pop culture in an undeniable fashion and continues to be treasured by children and adults alike. It has inspired movies, plays, and television series, and is responsible for introducing us to such fantastical characters as The Cheshire Cat, The Mad Hatter, The White Rabbit, and The Queen Of Hearts. With so many cool characters introduced in one story, though, it can get confusing!

Exhibit A: Alice plays croquet with The Queen of Hearts, who introduces her to The Gryphon, before ordering The Cheshire Cat to be beheaded, and imprisoning (and subsequently releasing) The Duchess, whose lost fan is searched for by The White Rabbit, whom Alice followed down the rabbit hole to begin with? Oofda!

To help you keep things straight, the Alice In Wonderland superfans here at HalloweenCostumes.com banded together to create this nifty character map! We're confident it will prove a great resource should you ever find yourself down the rabbit hole. Just remember: steer clear of anything that says EAT ME and DRINK ME while you're there!

(To be on the safe side, that's probably a good rule of thumb in our world too.)

We'd also like to take this opportunity to wish all of you a Very Merry Unbirthday!! (Unless of course it happens to be your actual birthday...which would be quite statistically impressive.)