Minions Questions & Answers: Everything You Need to Know Before Seeing "Minions: The Rise of Gru" 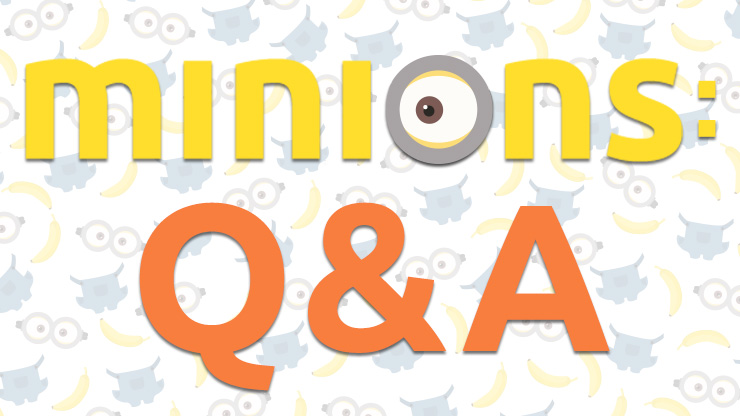 It's finally July, which means Minions: The Rise of Gru is only one year away from being released in theaters! While we know that seems like a long time, we wanted to give you (and your kids) plenty of time to get prepared for the next time the Minions hit the screen. So throw on those goggles, slip on those coveralls and let's get talking all things Minions!

When is the new Minions movie coming out?

As of now, the next Minions movie is titled Minions: The Rise of Gru and is slated to release July 3, 2020, just in time for Fourth of July weekend. Kyle Balda will be returning to direct the sequel with a new co-director Brad Ableson. The plot is unknown at this time, though we're assuming—based on its title—that the movie will be an origin story of Gru's rise to evil with assistance from the Minions.

Where will the movie pick up?

Minions last left off with our favorite yellow dufuses being honored by their Queen. Kevin was knighted, Bob was given a small crown for his teddy bear, and Stuart gave the crowd a performance with his new guitar. Amidst the honors, Scarlet Overkill and Herb sneakily steal the crown only to be frozen by a very young Gru. Jaw-dropped in awe, the Minions then chase him down the street as he escapes in his ship.

What gender are the Minions?

A question that often comes up is, 'are there any female Minions?' The answer is no.

Minions creator Pierre Coffin has identified that all title characters in the Despicable Me series are male, as well as voiced by male actors. In an interview with The Wrap, co-director Kyle Balda stated, "Seeing how dumb and stupid they often are, I just couldn't imagine Minions being girls."

Who are the Main Minions?

The main Minion squad features Stuart, Kevin, Bob, Dave, Phil, Tim, Carl, and Jorge. For a breakdown of each character, head over to our Who's That Minion? blog and read more.

Who are the three main Minion characters?

We were introduced to the original trio of Minions including Kevin, Bob, and Stuart in the first film, Despicable Me. The lovable trio has been continuously featured throughout the rest of the films.

Which Minion is Bob?

Bob is arguably the most unique of all the Minions. He is notably defined as the only Minion that has been shown to be heterochromatic, having both green and brown eyes. He also is known to be the most childish of the three and often finds himself snuggled up for bedtime stories with his stuffed teddy bear, Tim.

Which Minion is Kevin?

In the film, Minions, Kevin is shown to be the leader of the iconic trio. He's also the tallest and lankiest. According to The Wrap, Minions creator Pierre Coffin said "Kevin comes from an ancient Greek word ('Kevinos') which means leader".

Which Minion is Stuart?

Stuart is easily recognizable by his split down the middle, combed hair. He's musically inclined and knows how to play the ukulele and guitar.

How many different Minions are there?

There are 48 different types of Minions. The variants include the number of eyes, hairstyle, and body type.

How many one-eyed Minions are there?

There are hundreds of Minions featured in the Despicable Me series. Of those, there are around 48 possible combinations (between the number of eyes, hairstyle, and body type). If you're wondering why some Minions are one-eyed and others are not, we can assume this is for character distinction. Without the eye variant, it would be much harder to tell characters apart and leave less room for combinations of possible Minion appearance.

The main one-eyed Minions featured include Carl, Stuart, and Phil.

What color are the Minions' eyes?

When it comes to eye color, nearly all Minions' eyes are brown. Though Bob does remain an outlier, being the only Minion to have heterochromia.

What do the Minions wear?

The Minions are equipped with black gloves, black boots, metal goggles, and denim coveralls featuring Gru's emblem on the front. So stylish!

What language do Minions speak?

The main language of the Minions is known as "Minionese", also referred to as "Banana Language" or "Minion Language". The language is believed to be borrowed words from a plethora of other languages including Spanish, Italian, Chinese, Filipino, French, and Russian.

Did that answer all of your burning questions regarding Minions? If you have more, let us know in the comments below! We are beyond excited for the sequel to come out and will be watching the films on loop until the day comes.