Who's That Minion? 8 Despicable Me Minion Character Profiles

There are times in the Despicable Me movies where over 10,000 Minions are shown on screen at once! Considering that they look fairly similar—some nearly identical—it’s almost impossible to keep track of who is who. What are the Minions' names? (And what is a minion anyway? All Minions are short yellow critters that wear overalls and goggles, but we may be finding out more.) If you have seen the movies, you likely remember a few of the Minion names, but do you remember what kind of shenanigans each of the Minions cast gets into? We wanted to prepare you for the Minions movie and other Minions-related escapades, so we created these character profiles for 8 of our main Minion men. Let’s see how well you know your despicable Minions! 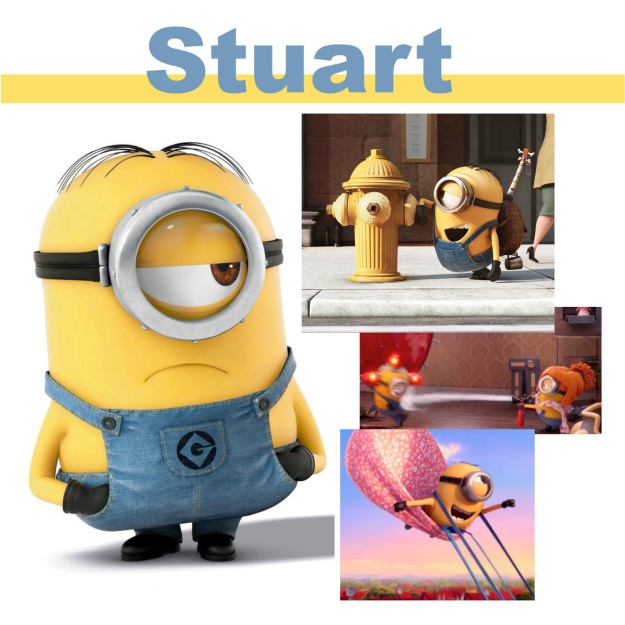 Minion Stuart is one of the three main characters featured in the Minions movie. While he acts fairly innocent in the first few movies, he plays a teenage rebel in this on-screen appearance. Distinguished by his one brown eye and center combed Minion hair, he has been fairly easy to keep tabs on.

During the first two movies, Stuart was involved in a lot of mischief. A few of his most memorable moments include flirting with a yellow fire hydrant, spraying Carl with the fire extinguisher while he was dressed up as Lucy, driving a car with Dave, being used as a glow stick, and parasailing behind Lucy’s car, bound by his bibs. 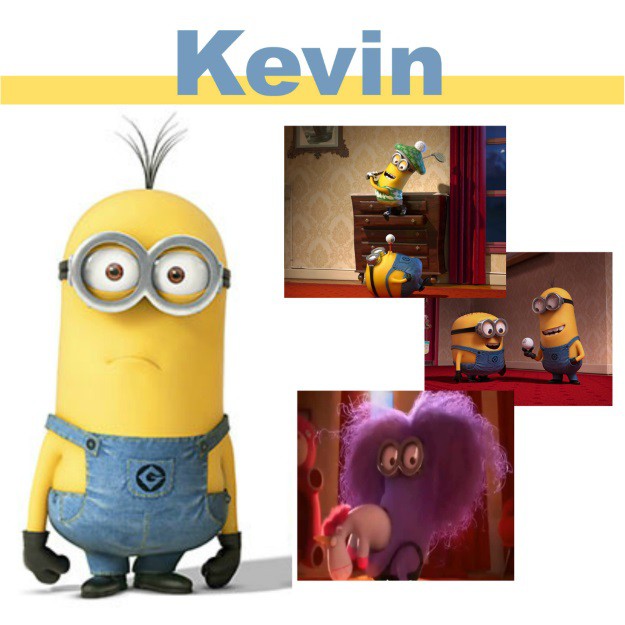 In the Minions movie, Kevin the Minion takes on a leading role. While Minion Kevin was a household name in both Despicable Me movies, the two depictions are actually quite different. The Kevin in the original Despicable Me film was much shorter and only had one eye, nearly identical to Stuart. It is unclear if the directors gave Kevin a redesign before Despicable Me 2 or if these are different Minion characters altogether.

The Kevin that we see in the Minions movie is the one you likely remember as the golfer: he tried to hit a golf ball off of Jerry’s mouth in the second movie. Shortly after, they hear rustling noises coming from outside, which they discover is just a cat in the garbage. Kevin teases Jerry for being a coward and then both of them are abducted by Dr. Nefario and taken to the Minion beach before they are turned evil. Kevin was also the only Minion cured by the actual PX-41 antidote. 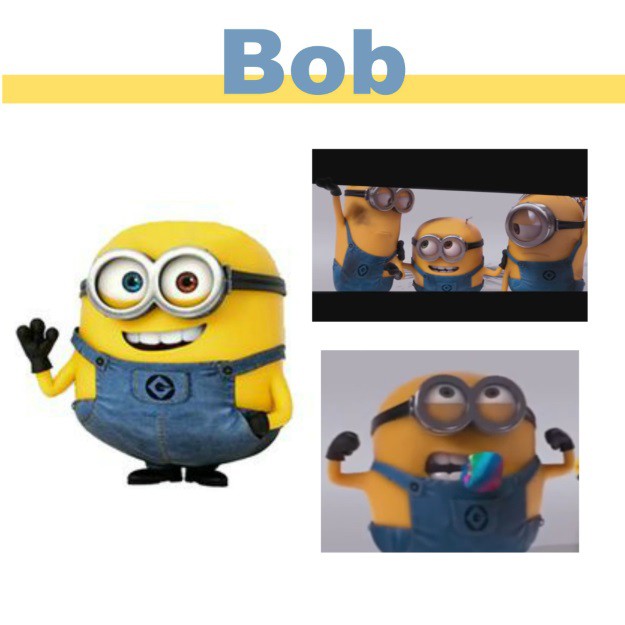 Alongside Stuart and Kevin, Minion Bob is the final main character in the Minions movie. He is short, plump, bald, and Minion Bob is the only one that has two different colored Minion eyes (green and brown). This is also known as heterochromia.

Although Bob doesn’t have much screen time in the second Despicable Me film, you likely remember him from the end credits where Kevin, Stuart, and Bob auditioned for the new movie. His childlike antics were hilarious as he worked tirelessly to keep the audition screens open. 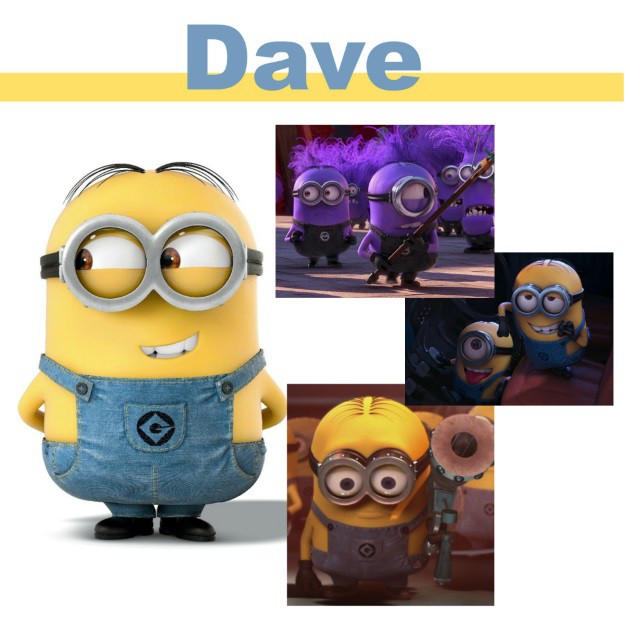 Minion Dave isn’t going to be one of the main characters in the Minions movie, but in Despicable Me, Dave was up to no good quite frequently. Which minion is Dave? He has two brown eyes, combed hair, and you will often find him causing trouble with Stuart.

Perhaps you remember the Minion that shot the bazooka full of other Minions? That was Dave. He also steered—or held the wheel, rather—Lucy’s car around the mall while Stuart pressed the pedals. Along with Stuart, he was one of the only Minions who wasn't abducted by Dr. Nefario and turned into an evil Minion. Gru then painted Dave and Stuart purple to try to save the other Minions, but when Dave tried to communicate, his paint began to smear. Busted! 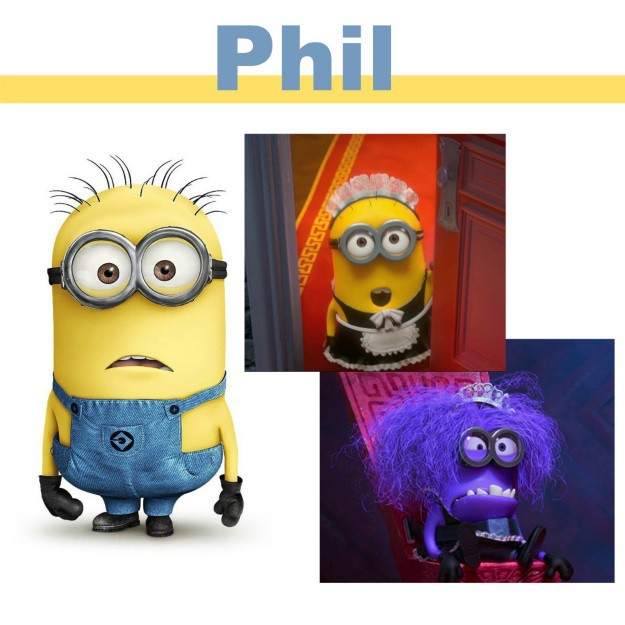 Minion Phil is a two-eyed, spiky-haired Minion who doesn’t get a lot of screen time, but is infamous for his lovely French maid attire. While Phil was cleaning the house, there was a knock at the door. When he answered it, he got abducted. Although we never see who abducted him, it was assumed to be Dr. Nefario.

We also hear Phil’s name mentioned in the first film. He is the Minion who dresses up like a baby and goes to the store to get Agnes a new Unicorn toy. However, there is one huge difference: this Phil only has one eye. Like Kevin, it is unclear if this is the same character with a new design or a completely different Phil. 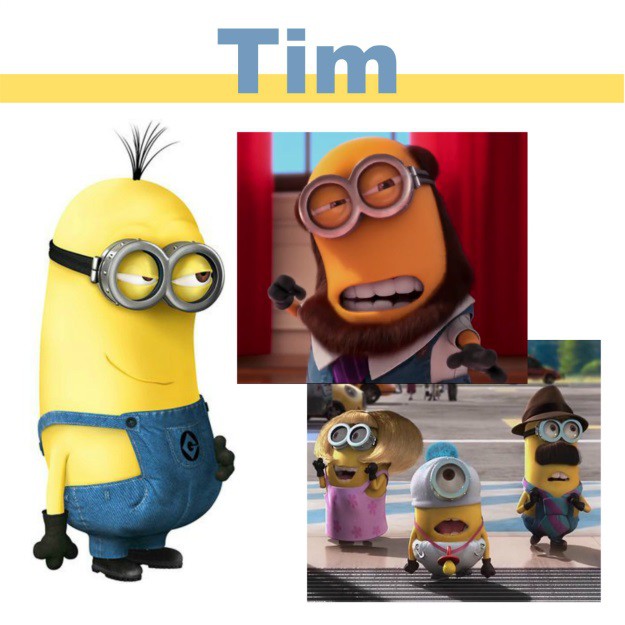 Minion Tim looks a lot like Kevin: tall, with two eyes and sprout hair. It can be extremely difficult to tell the two apart, though Tim is often dressed like a dad. In the first Despicable Me movie, a mustache and a hat gave him the dad-like quality. During the second movie, he is seen with a beard when Gru announces his new job. Strangely enough, Tim appears bald in this scene. We have also seen him with Phil and Mark attempting to sing "Copacabana". 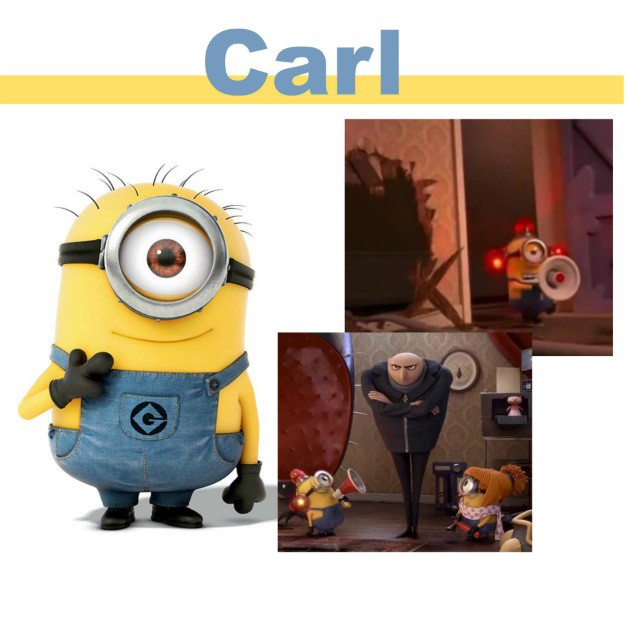 Bee-do-bee-do-bee-do! One of the most memorable lines happens to be Carl’s only line in the first two Despicable Me movies. Carl is another one-eyed Minion with one brown eye and spiky hair, but you can’t see it beneath his siren hat. After Gru sets his phone on fire, Minion Carl comes into the room saying "bee-do" on repeat through a megaphone. Stuart, who is dressed like Lucy, then sprays him with the fire extinguisher and launches him across the room in a not-so-subtle effort to tell him to be quiet. 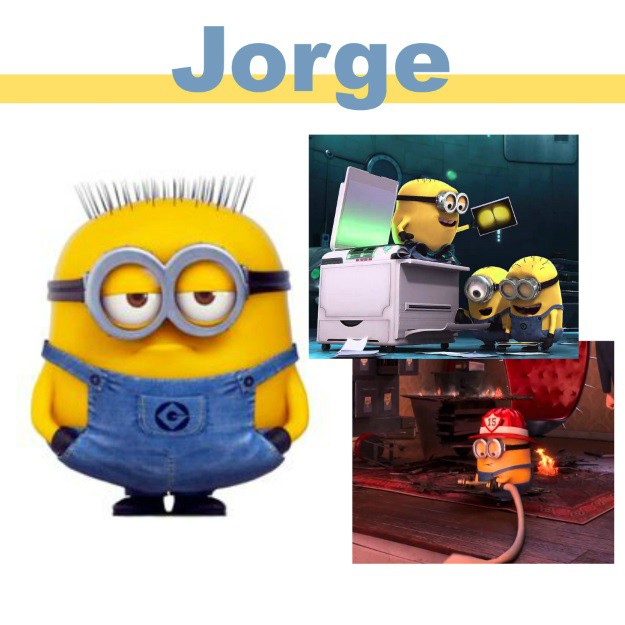 This plump little two-eyed, spiky-haired Minion is not very well-known by name, but it’s hard to forget him. If you don’t know who Minion Jorge is, you will likely remember him as the Minion who photocopied his own butt. How can you not laugh at that? "Bottom, bottom. He he he." Jorge was also one of the firefighters carrying the hose, and he busted through Gru’s wall. 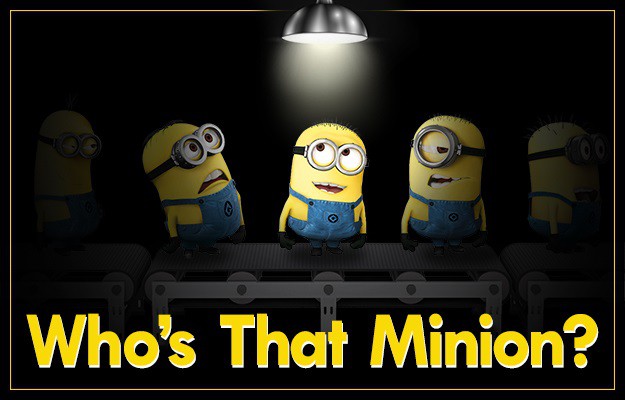 Minions are small and somewhat incomprehensible, troublesome but also innocent and fun-loving. They're basically children already. Complete the look with Minion costumes for kids and you'll have everything you need for a fun Halloween party. Or a birthday party, or a bapple party.

What's a bapple party, you ask? Wouldn't you like to know!

Of course, we've got Minion costumes for adults as well! They're fine for solo Halloween fun, but group Minion costumes are just the best. Get the crew together and dress as Bob, Dave, Kevin, and the rest. Or add Gru and Dru, too! They're also fun for recreating your favorite Minion memes or making Minion-themed Christmas cards for the rest of the fam. 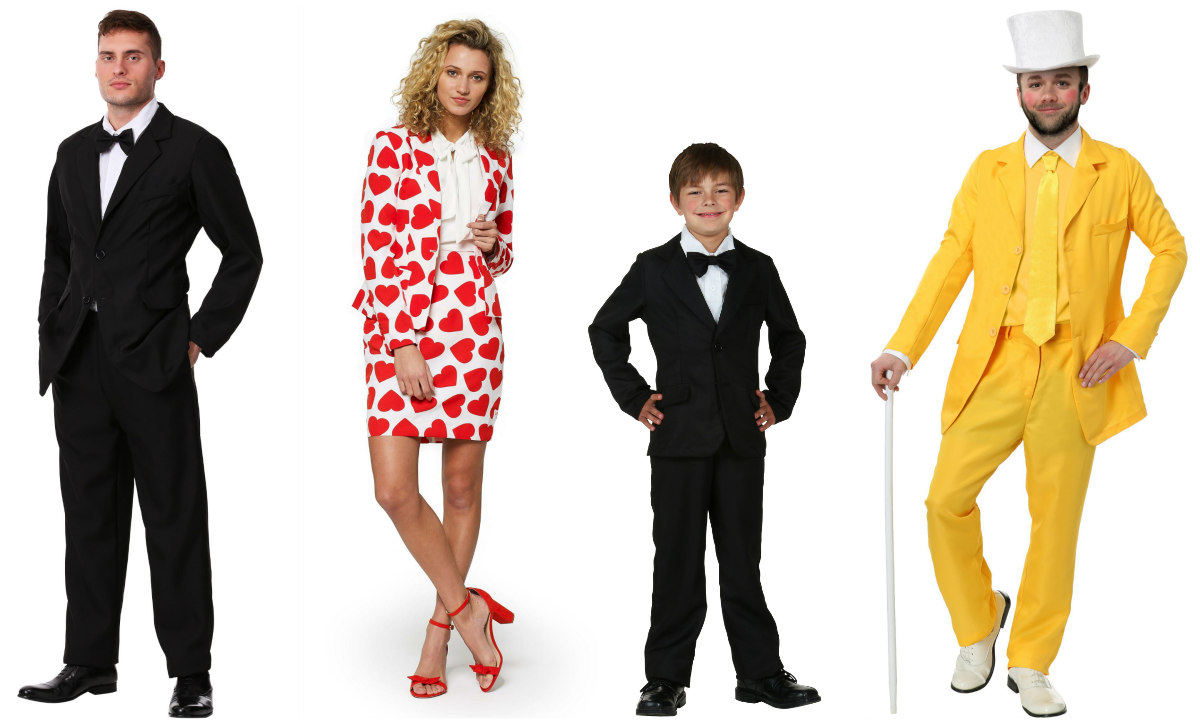 And if you need #gentleminions suits for Minions: The Rise of Gru, we've got you covered! You can choose from traditional black tuxedo suits for adults and kids and fun outfits like heart and yellow suits. We hope these GentleMinions costumes make it into some memes!

ALL of these 10,000+ little guys are so cute, we just can’t get enough! It is so much fun to watch them wear silly costumes with their overalls! What are your favorite Despicable Me characters? Do you have a favorite Despicable Me Minion? Let us know in the comments. And don’t forget to pick up your favorite Minion costume so you're prepared for the new Minions cartoon film release!