Valak from The Nun Makeup Tutorial

If you've seen James Wan's The Conjuring 2, Valak is no stranger to you. Her creepy, sinister face will send chills up your spine and often linger around your mind for days. She's so infamous that the studio has released a movie of her own, appropriately titled The Nun. According to Fandom, Valak is also known as the Great President of Hell and has the power to summon over 30 legions of demons at his command. After reading that description, you're probably going to want to bring a pair of Pampers just in case when you see the film.

If you're like us and love dressing up as horror icons, you've come to the right place. After The Conjuring 2 was released, Valak became a costume you often would see at parties. With The Nun coming out this year, we don't expect that to be any different. Who wouldn't want to dress up as the Great President of Hell for Halloween? Check out our video below and watch our makeup artist walk you through how to use minimal makeup to achieve this maximum horror look.

The Great President of Hell himself.

Welcome to the Halloweencostumes.com YouTube channel. Today we'll be doing a tutorial on Valak from The Nun, coming out today. For this tutorial, we used Elmer's glue, some white cream makeup, some translucent setting powder, assorted makeup brushes (nice fluffy ones), a cream eyeshadow as well as powdered eyeshadows, black-colored hairspray, some black face paint, and tooth black.

Ok with your spoolie, you just brush in your eyebrow hairs up in the direction of the growth. And, we're going to do a good three to four layers of this, letting it dry in between each layer. As the layers dry down, you can just take some translucent setting powder, and just liberally pat that into the brow. We'll do that between each layer. And just repeat!

Ok, once you've got your brows pretty well-covered, you can go in and use a white cream makeup (mehron). I'm going to apply this really well, liberally, all over my face. Ok once you've got your face on, start going in and doing a, we're going to set the powder first. Just using the same translucent powder that we used on our eyebrows, and we can really pack this into my face again.

Because we used a cream-based base, we're going to make sure that you're using an awful lot of the powder so that your makeup doesn't come off. Now we can brush off any excess with the brush. It doesn't have to be perfect because we're going to end up texturizing the skin after we contour, so rough is okay.

And with the contour, I'm just going to go in with some grays and browns, and just sort of mix some colors together, and then I'm going to do a contour around the temple area, and the cheek, and then I'll get a little bit into my nose as well. Slightly smaller brush. I'm going to go in and really gently on my nose. I'm going to start carrying that up into where our eye space is going to go, which is going to be very black, so, it won't have to be perfect. Just get some layers going. I'm just going to pull a little of shadow where the eyeshadow would be, where the shadow of the eye falls, and also like the jaw area.

Now I'm just going to go in around the eye socket in sort of a circular motion. This is going to be the outer edge of where out eyeshadow is going to be blended into. Carry that under the eye as well. Now I'm going to go in with some black cream shadow, just right on my eyelid, and a little bit in my waterline. Valak has super, super black eyes,so you just want to go in and really heavy. And then you blend it out, and it's a messy look, so you don't have to be precise.

So now, Valak has little almost like veinycracks in her skin, so I'm just going to take face paint that is watered-activated and a really, really fine-tip brush, and make just short little veiny strokes. I'll also use this to give her some crow's feet.

And then, lastly to just sort of texturize the skin, I'm using a black-colored hair spray, and I'm just going to quick spray on my face. And this will just create like a more of a mottled look to the skin so it's not all just white with contour. Close your eyes! Now, we're going to do a little extra step. So everything else on the skin, now, I mean this is plenty for the Valak look, but with a couple little extras, you can take it up a big notch. Tooth black, like one of my favorites, just make sure that your teeth are dry and this will get you Instagram-ready. So just tooth black, it's like a tooth enamel, and it's very minty. I like it. So I'm brushing it on, and I'm just going to sort of mottle it on my teeth so it's nice and messy. And this will just come off with toothpaste. So, really easy.

And, for the last little bit, I'm going to change her eyes. Ok, so these are just some colored contacts. Mine are prescription. You can get them online easily. You will have to have a prescription even if you don't need to have an actual one. I'm blind (without it). Even if you're going plain lenses, you'll have to get a prescription from an optometrist. But, they were reasonably priced, so you can knock this costume out with your HalloweenCostumes.com nun costume and a few extra items. Really cheap this Halloween, and it will be super creepy. Anyone can do this. And this is Valak from The Nun, and The Conjuring horror movies. So, let's check out the costume! 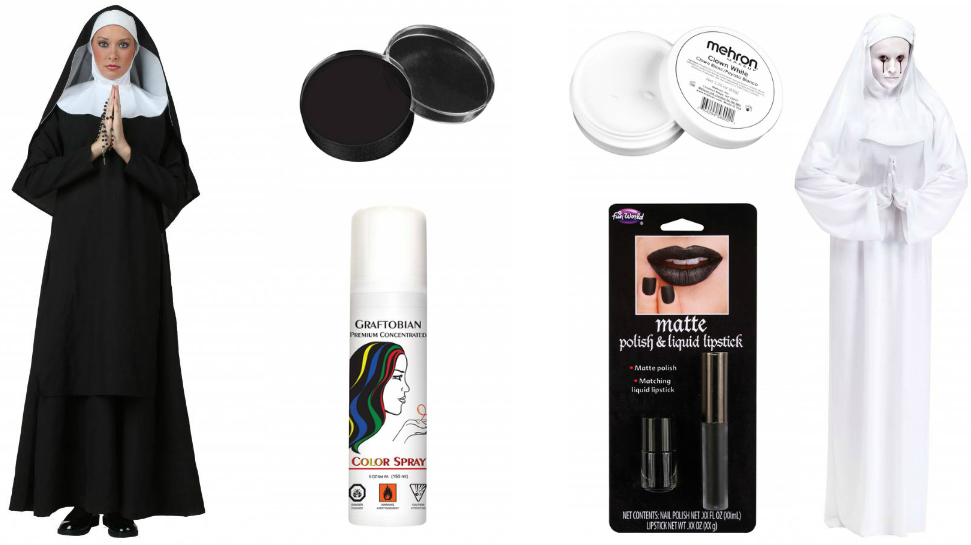 Luckily, Valak's costume is quite simple. After all, in this movie, he's a nun. If you're going to go for the darker, more sinister look, go for the black nun costume. If you're aiming for a lighter, more eerie look to the costume, go for the white nun costume. You could even do this costume with a friend and have one of you be Valak and the other as Taissa Farmiga's character, Sister Irene. As far as makeup goes, this look barely needs any (your bank account is thanking you). Things you will want to pick up that aren't listed above are black eyeshadow, makeup brushes, and beauty blenders. 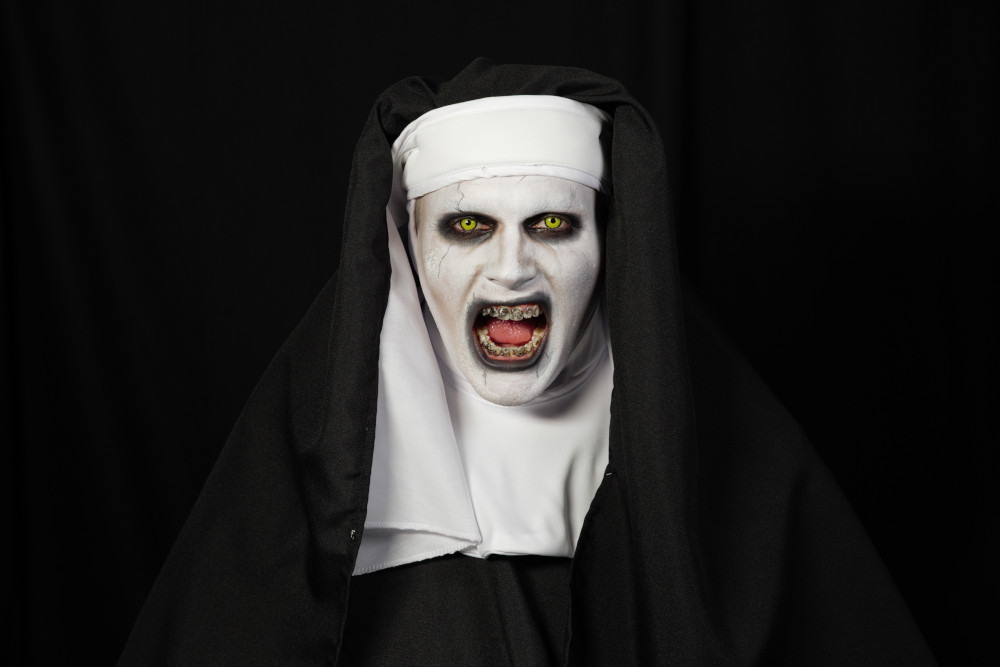 Here's Valak from The Nun. 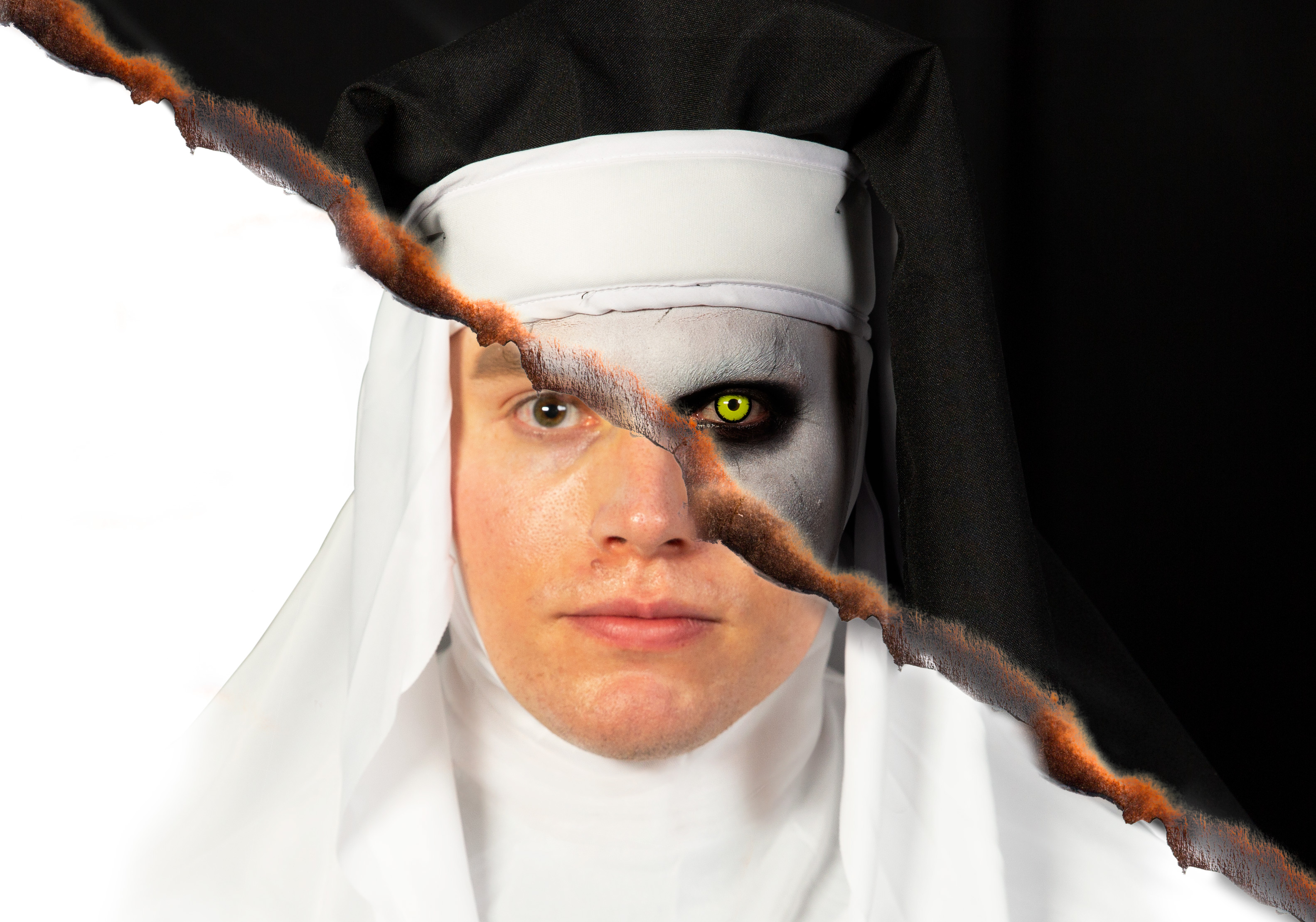 Ed and Lorraine Warren are spooked.

This look was inspired by The Nun poster: 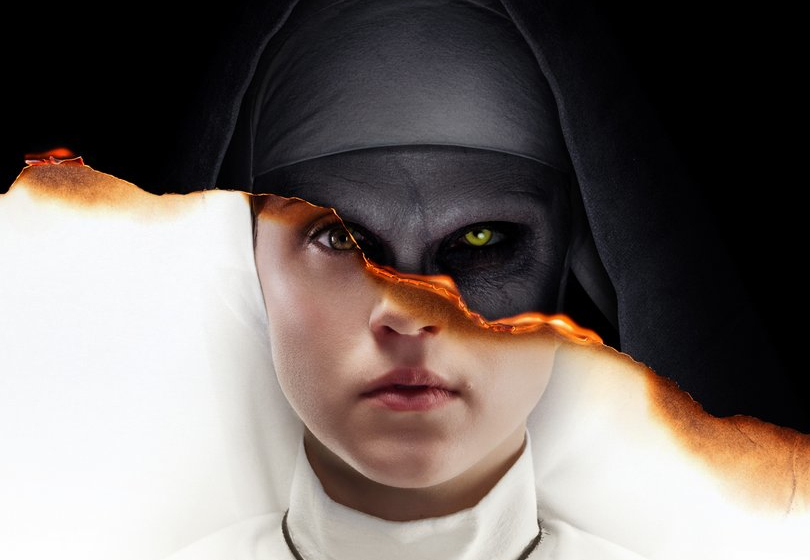 Excited to show this look off to your friends at upcoming Halloween parties? Take pictures of their reactions and tag us on Instagram @funcostumes. If you plan on hosting an Ed and Lorraine Warren marathon before seeing the film, this also makes for a great look for your party. Maybe you want to wear the costume around the house and prank your roommates/family? Whatever the case, we hope you feel equipped and ready to channel your inner Valak and bring on the scares this fall. Happy haunting!