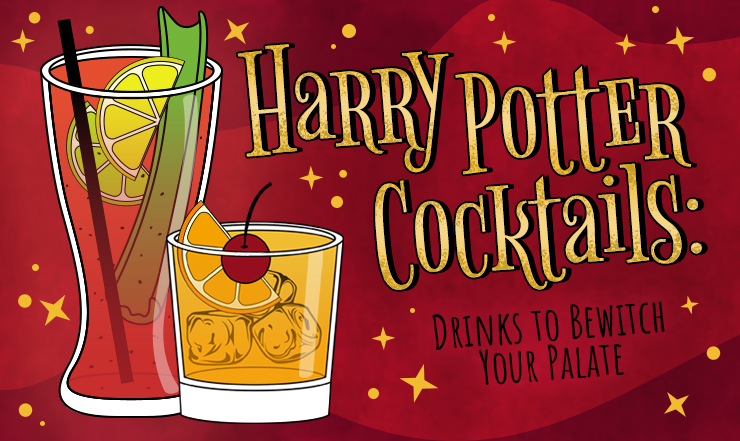 Gather ‘round, cocktail-loving cronies! We want to tell the tale of how we met Madam Cadora, the wizarding world’s most famous bartender, during a recent visit to The Three Broomsticks pub and inn. Known for serving drinks to some of the most famous and infamous witches and wizards, Madam Cadora spilled the divination tea and revealed some savory secrets about her famous past patrons.

She told us all about how Severus Snape religiously spiked his Butterbeer with Gillywater and how Harry Potter spit out his very first shot of Firewhisky. Madam Cadora was also kind enough to fill us in on The Three Broomstick’s most popular Harry Potter cocktails and how to concoct them from the comfort of our own Muggle-abodes. So get your goblets ready, because we’re eager to pass Cadora’s confidential cocktail information onto you. No wands or cauldrons necessary to make these Harry Potter alcoholic drinks!

Click on cocktail and recipe images for larger view. 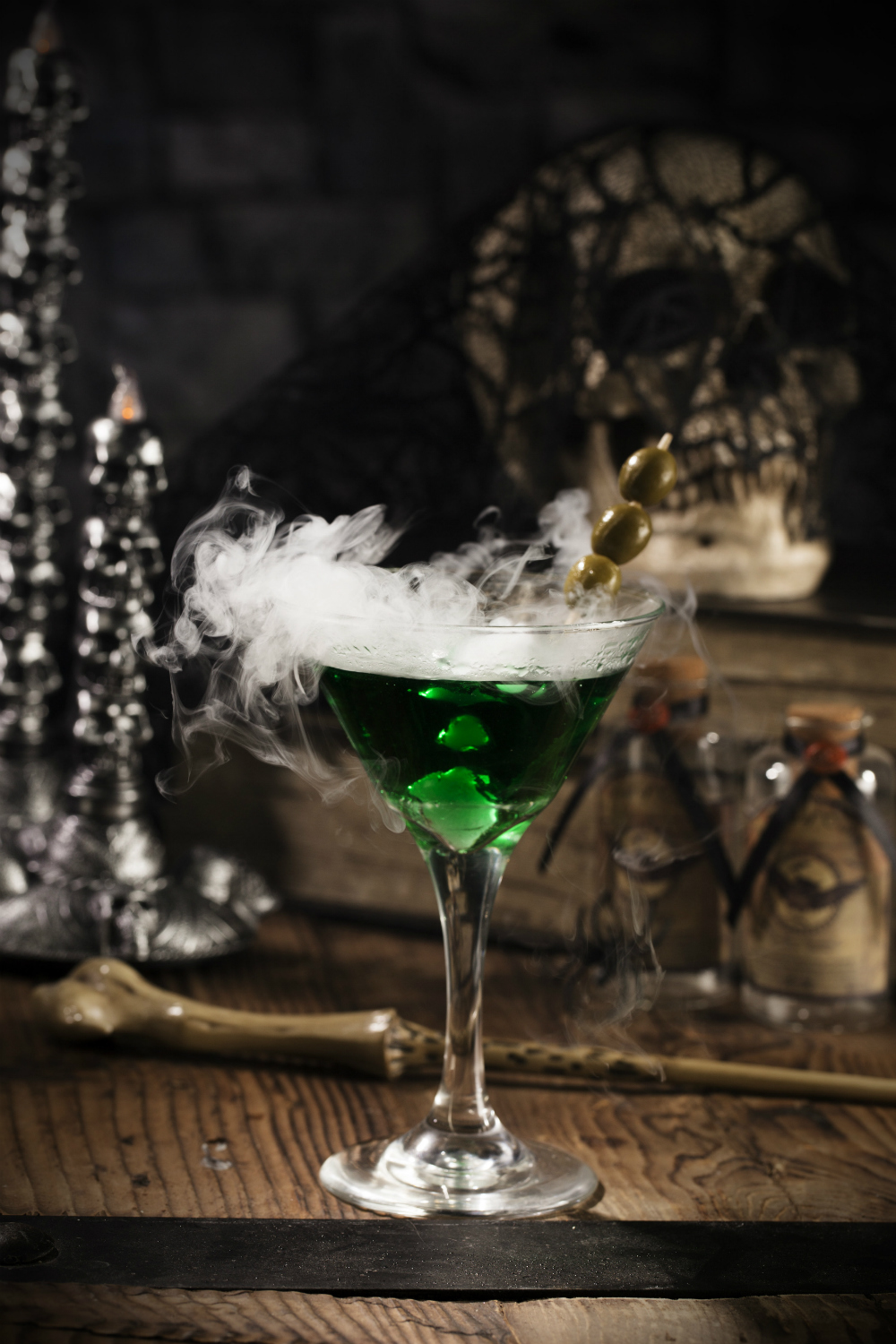 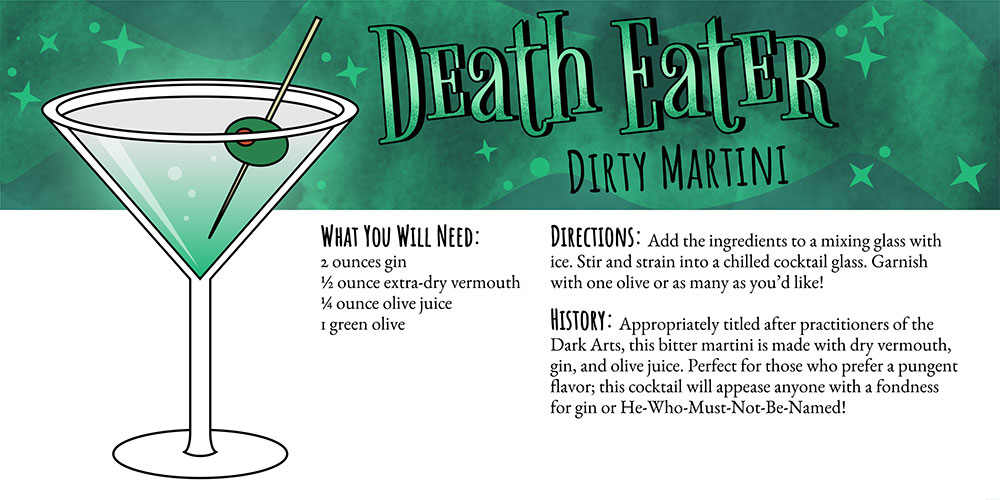 It's been said that Death Eaters often discuss ways to vindicate The Dark Lord while sipping this cocktail. Known for its unmistakable sour taste, it’s evident why Lucius Malfoy faithfully orders a Death Eater whenever he’s busy making pernicious plans at The Three Broomsticks. We recommend smoked fish or anchovy spread to compliment the briny flavor. After guzzling down a couple, it didn’t make us want to swear our allegiance to He-Who-Must-Not-Be-Named, thank goodness! 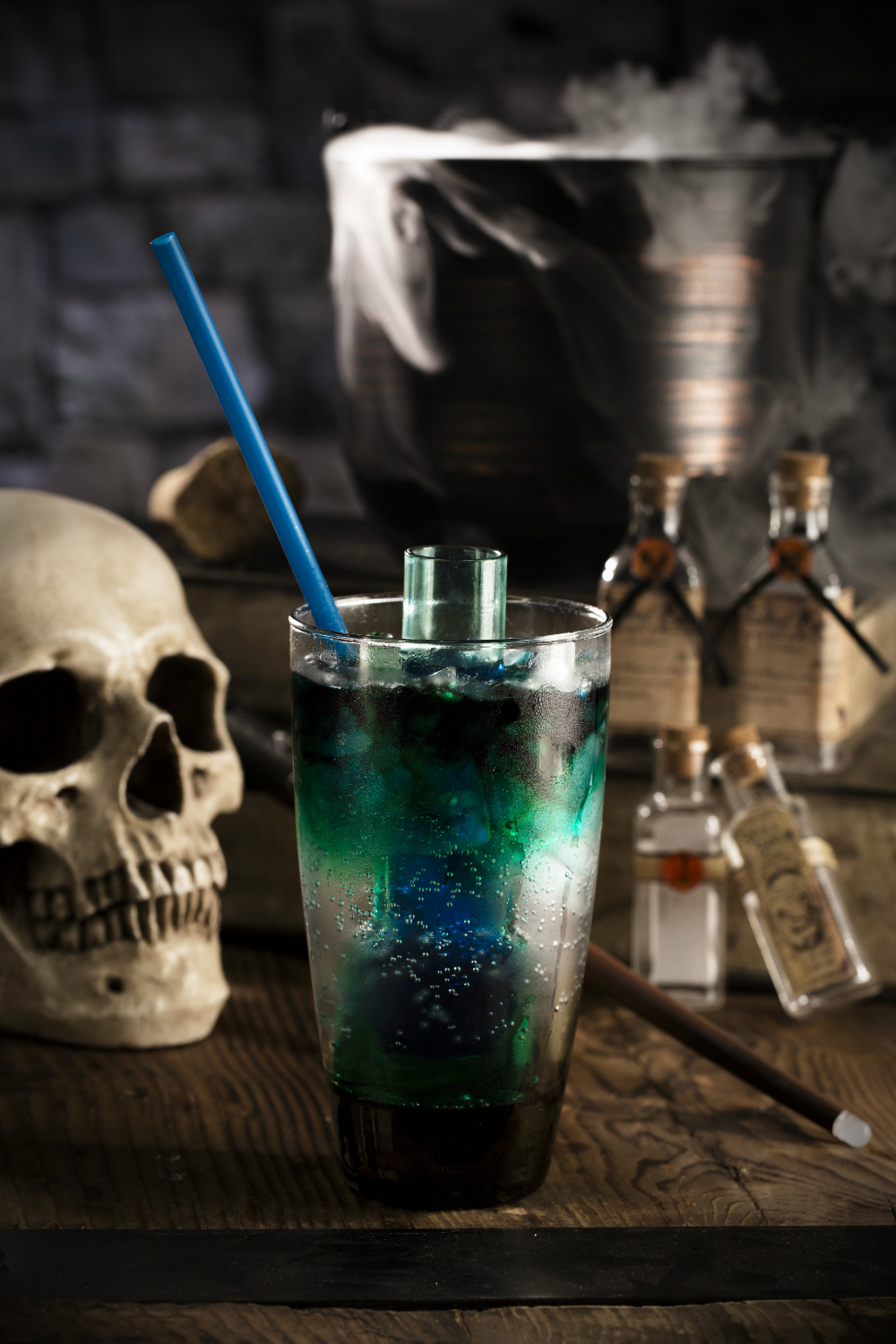 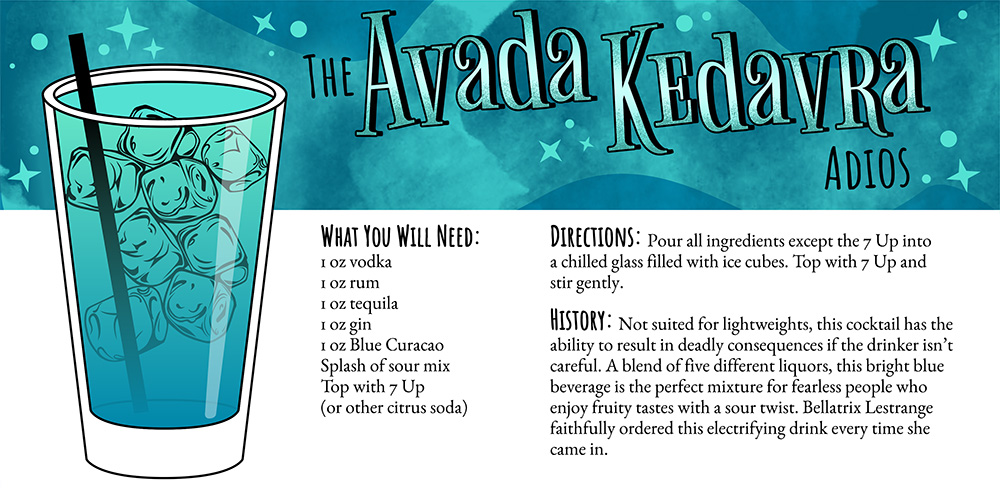 Before being thrown into Azkaban for committing unforgivable crimes, Bellatrix Lestrange once drank too many Avada Kedavras and challenged every customer at The Three Broomsticks to a duel. She was carted away immediately and the only duel that took place was between Bellatrix and the bouncer. Spoiler alert: the bouncer won! Although potent, the Avada Kedavra Adios is the perfect party drink, but only when consumed responsibly. 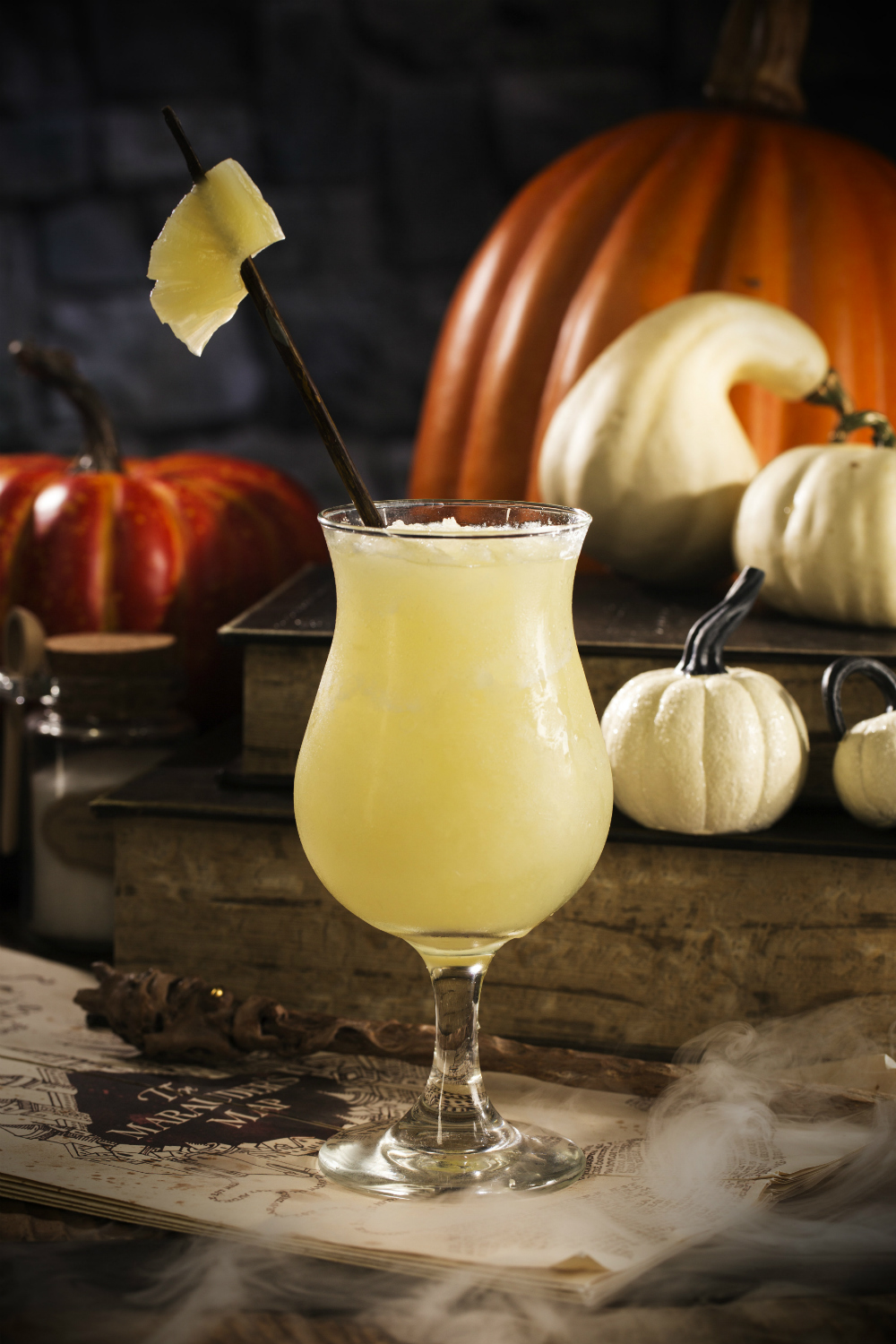 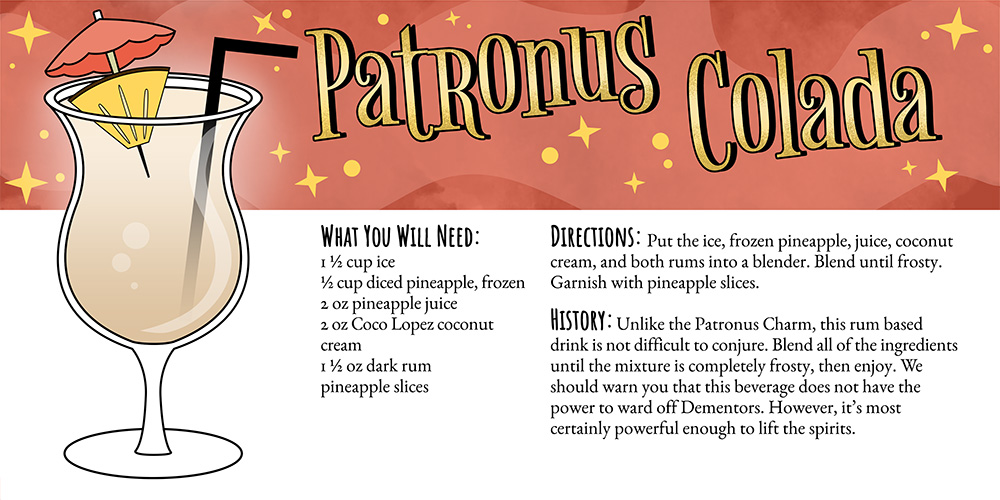 Only the most skilled wizards and witches can cast the Patronus charm, but just about everyone (yes, even Muggles, too) can mix the delicious drink. You don’t need a wand made from dragon heartstring and phoenix feather to make it, just ensure there’s a blender and a handful of pineapple slices available. The frothy potion is a tropical treat twisted with a fresh coconut flavor, so it’s the perfect drink to serve in the summer. Pair a Patronus Colada with loaded nachos, quesadillas, or tacos for a delicious fusion of flavor! 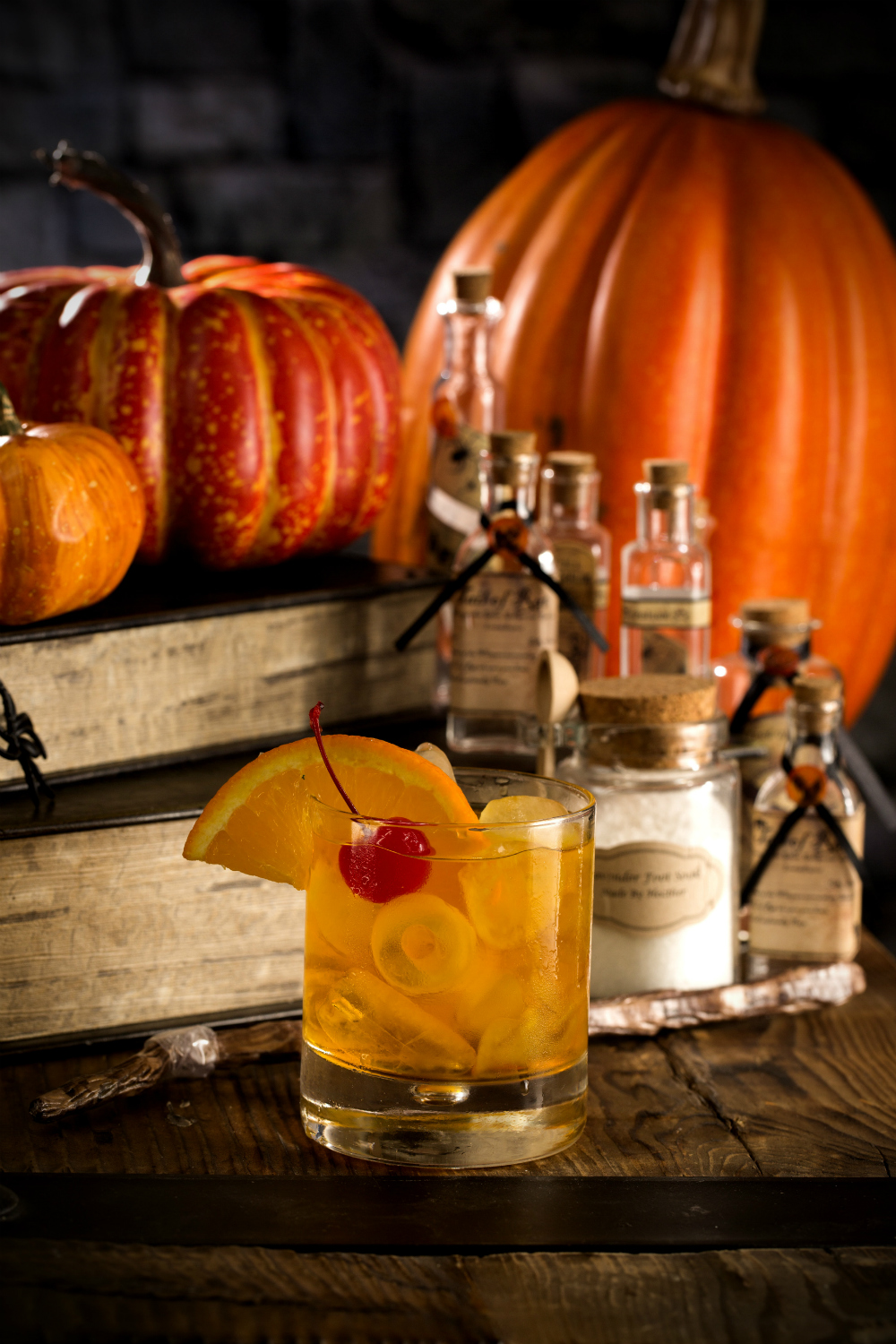 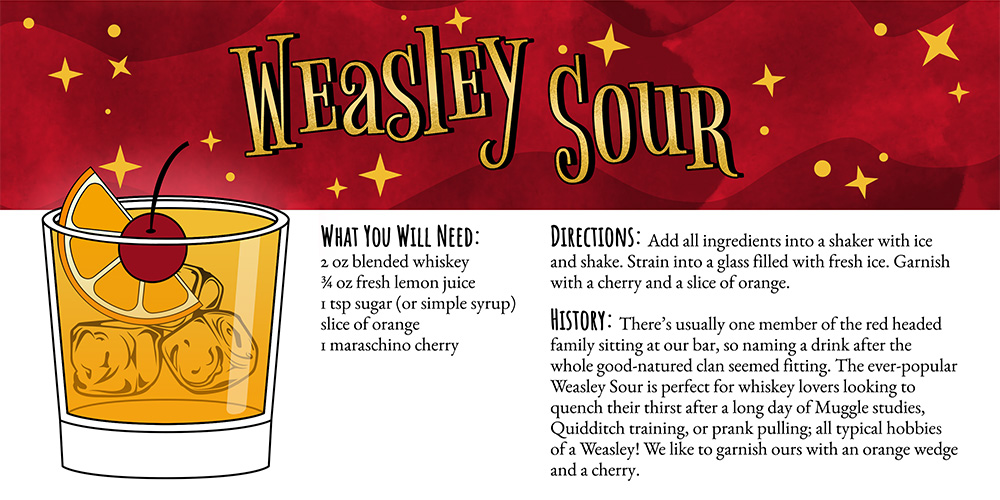 The most difficult part about making a Weasley Sour is deciding which whiskey to use. The rest is straightforward! This cocktail is simple and reliable in a pinch (just like Ron). All you have to do is shake up all the ingredients, pour it in a glass, and top it off with a cherry and an orange wedge. The tangy drink is dubbed after the good-hearted Weasley family because of its orange-colored appearance. We suggest arranging an assorted cheese platter to accompany this drink. 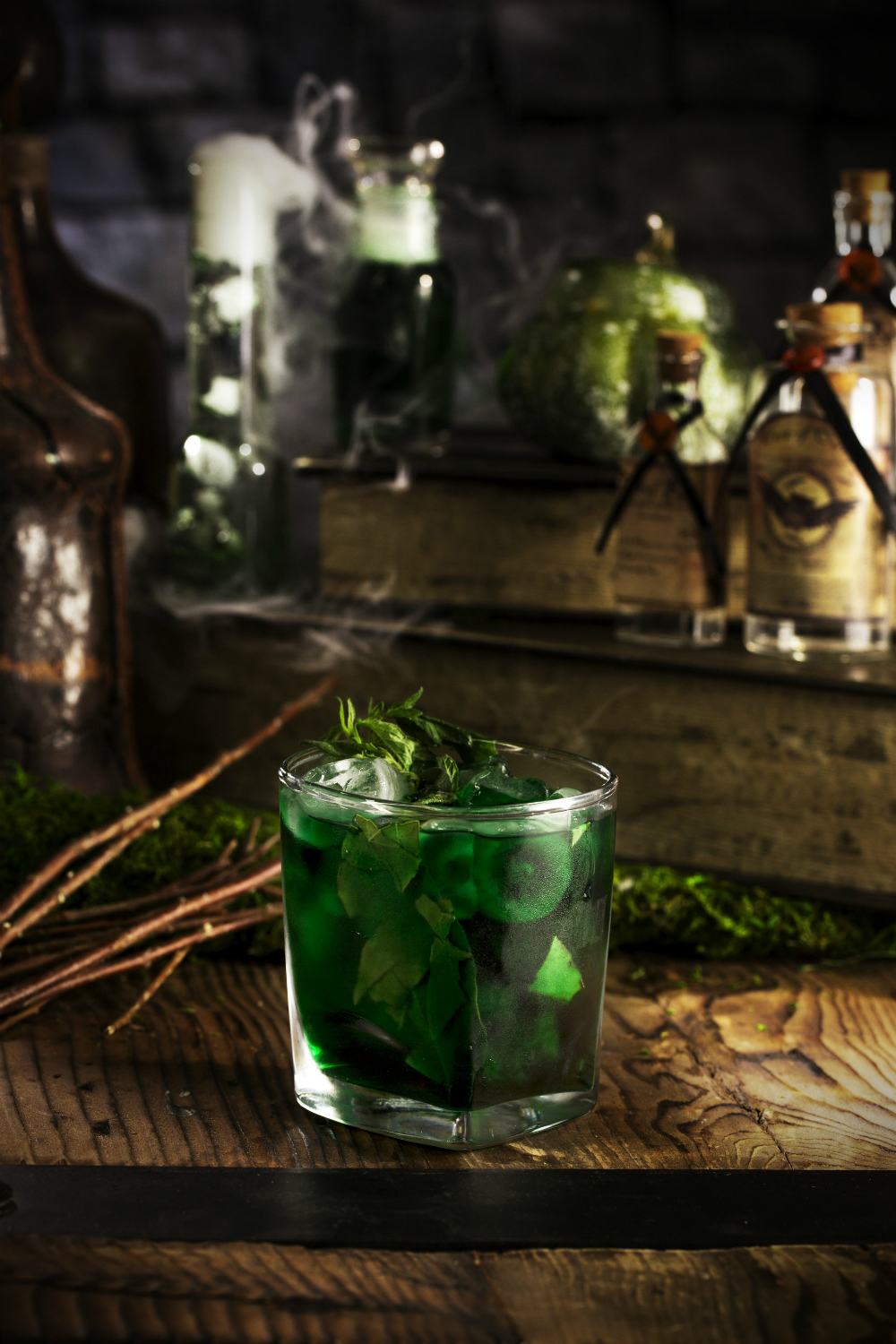 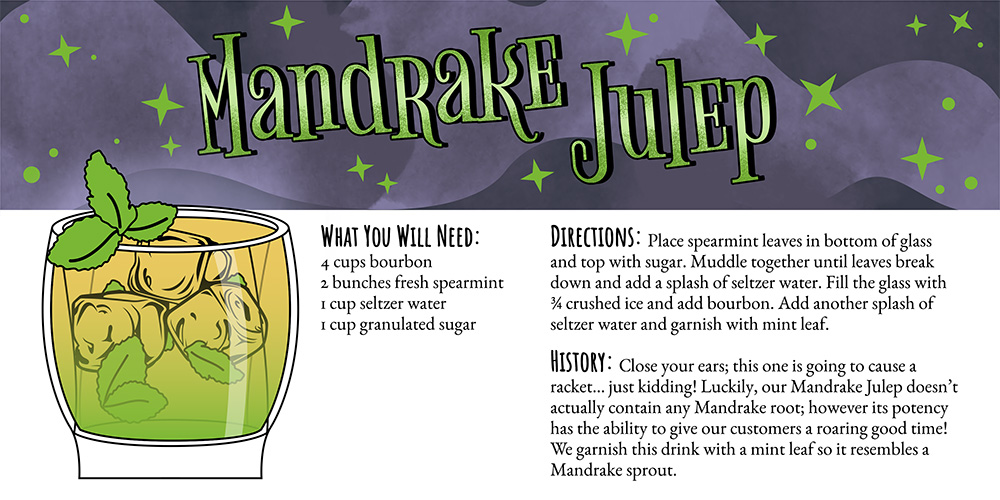 Don’t place an order for expensive Mandrake leaves just yet because this cocktail only calls for mint leaves. (The fresher, the better!) Madam Cadora tells us that this specialty drink is ideal for bourbon lovers and anyone who’s attending a derby. The powerful concoction tastes great when served with pimento cheese sandwiches and lemon-and-oil marinated chicken breast. We should also mention a Mandrake Julep is incapable of curing petrification: you’ll need real Mandrake leaves for that! 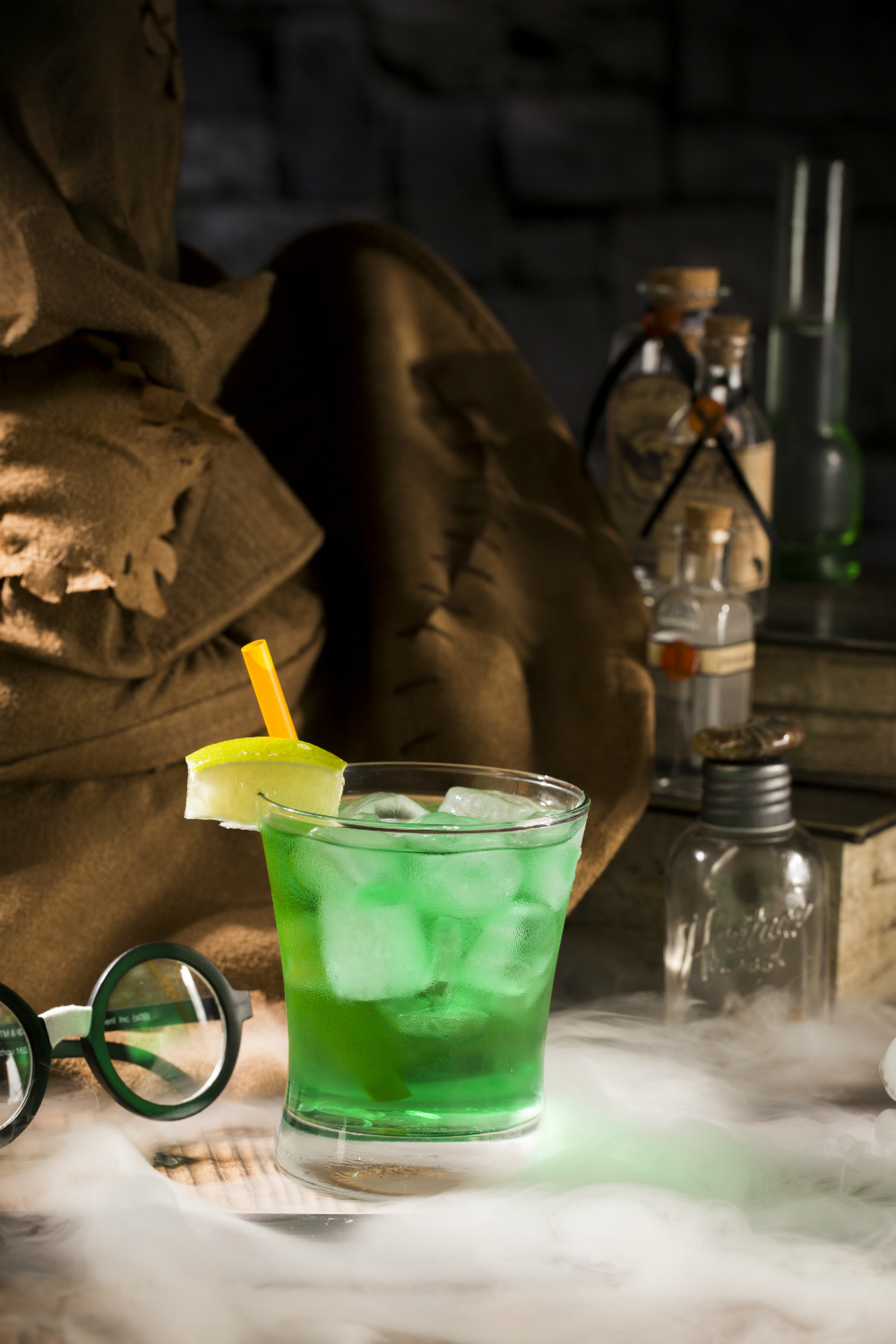 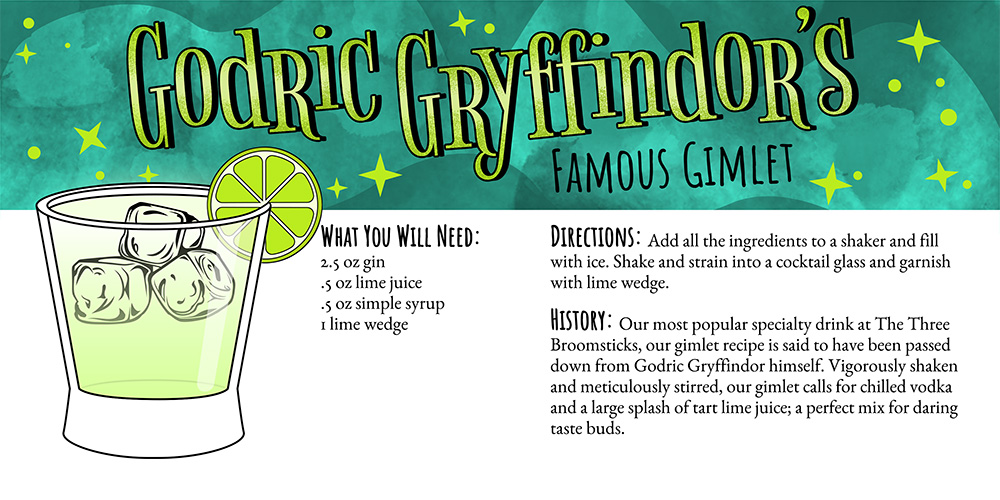 If you think the Sorting Hat would exclaim “Gryffindor” when placed upon your head, then the Famous Gimlet is the drink for you. A popular cocktail named after house founder Godric Gryffindor, its lime-infused taste is adored by some of the most accomplished and intelligent wizards and witches. Minerva McGonagall and Hermione Granger order it whenever they dine at The Three Broomsticks. Serve this drink with cured salmon sprinkled with fresh lime juice and mouths will water. 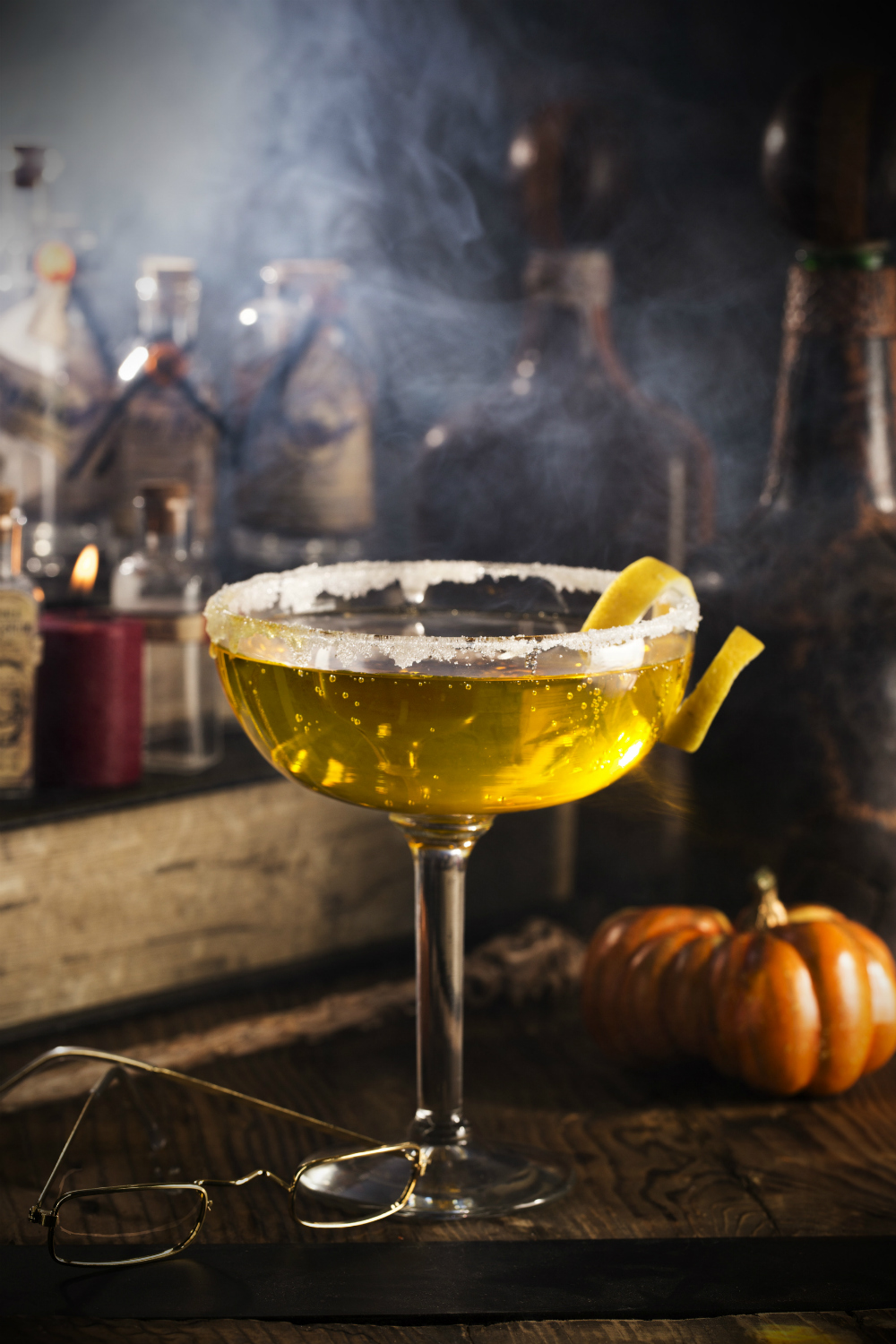 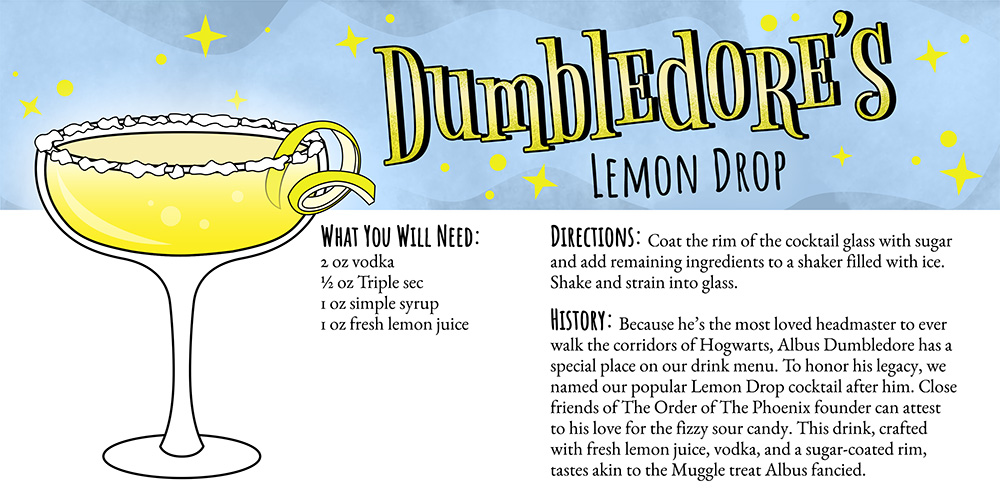 Former Hogwarts students can recall visiting Albus Dumbledore’s office and seeing a bowl on his desk filled to the brim with lemon drops. Everyone who knew the powerful headmaster knew his affinity for the sour candy that he simply couldn’t resist. While concocting this sour drink named after the treat, Madam Cadora uses fresh sugar from Honeydukes candy shop to coat the glass’ rim, but any sugar will do. This pungent drink, dedicated to the beloved headmaster, tastes both tart and refreshing, making it the perfect cocktail for adults with a sweet tooth! 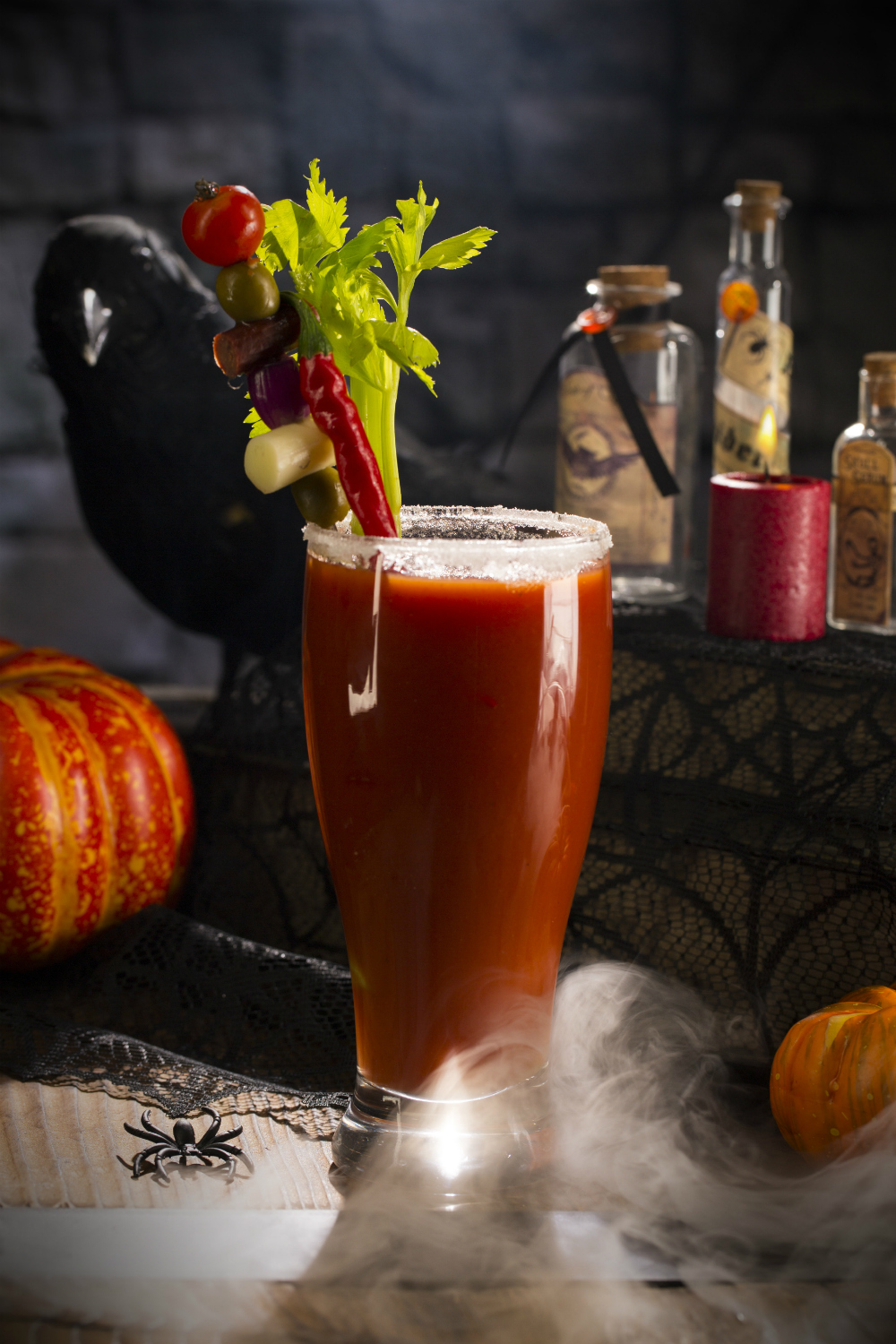 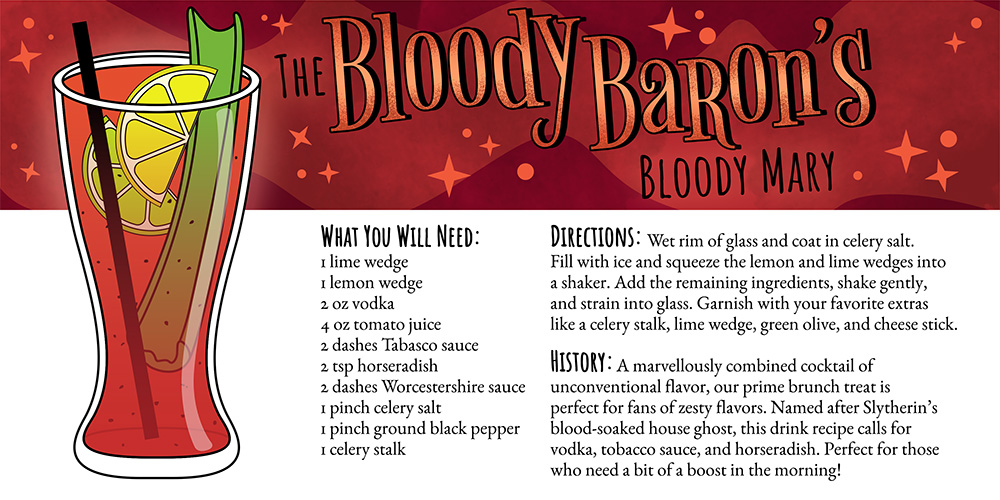 If you plan on hosting a brunch, there’s no better adult refreshment to serve than The Bloody Baron’s Bloody Mary. Packed with all sorts of delectable goodies, the hangover cure (at least for us Muggles) reinvigorates the body after a night of drinking. It can also be made spicy or mild to accommodate all taste buds. Don’t worry about serving an entree with this classic brunch drink, just stack cheese, olives, and beef jerky on a skewer and it’s ready to serve. Also, we should mention that those who use our recipe will not be hassled by the bothersome Bloody Baron, we promise! 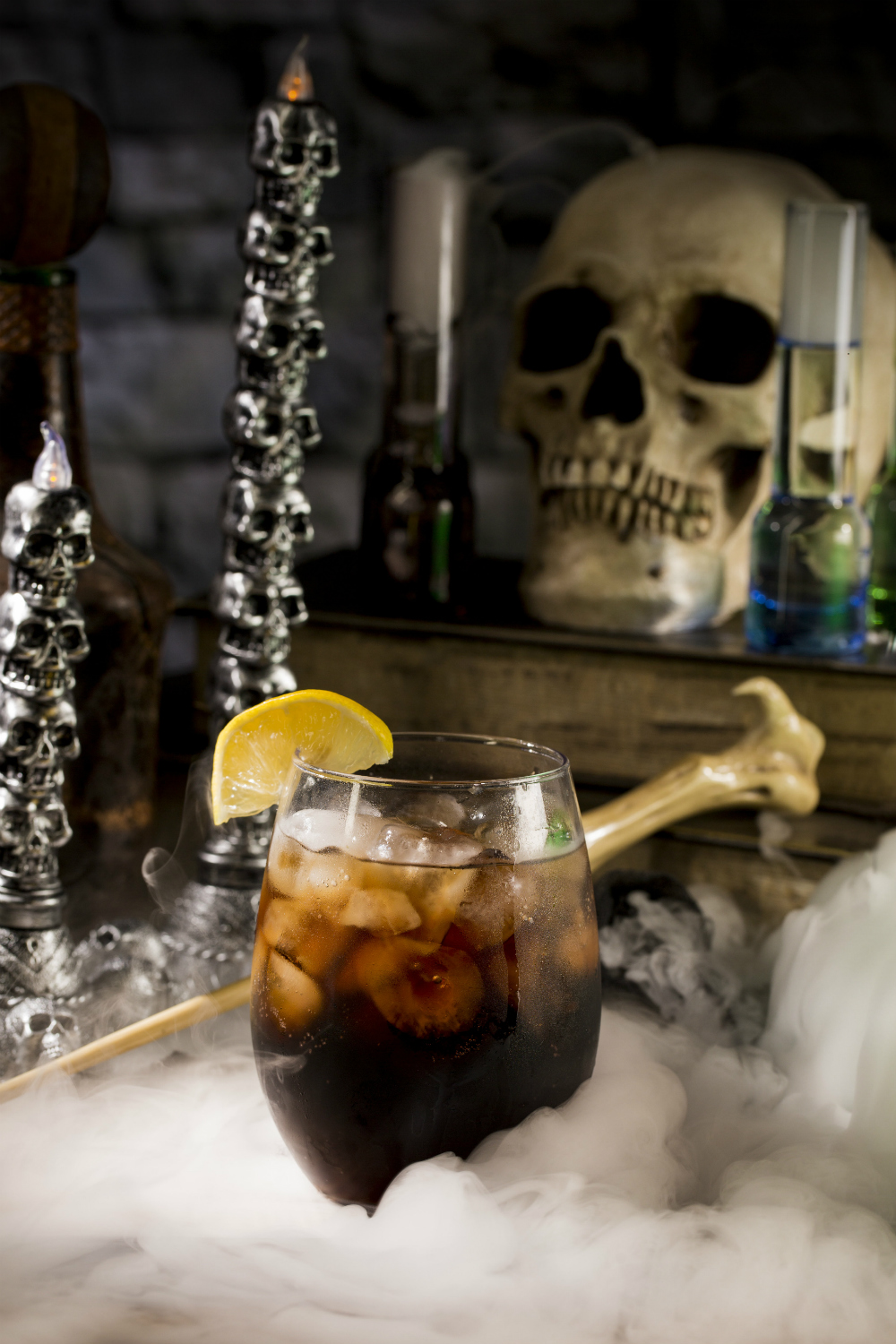 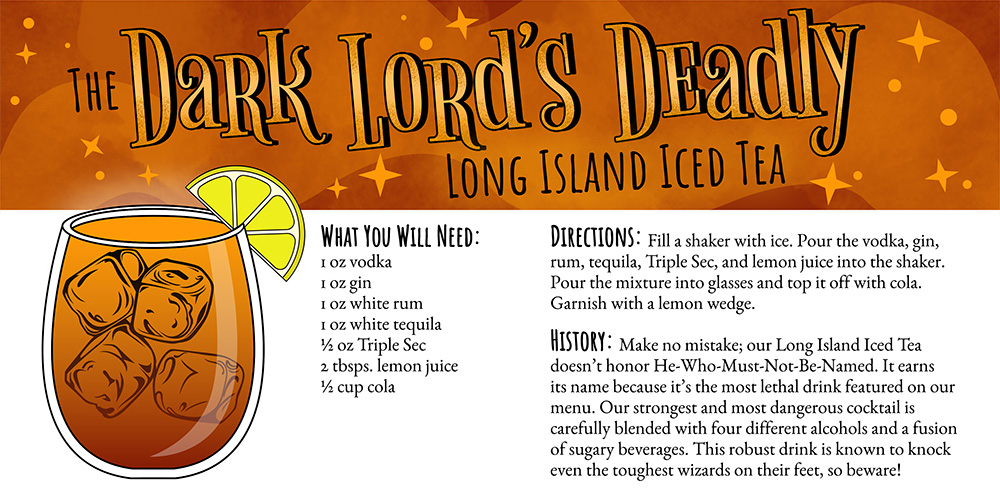 There’s nothing delicate about this strong cocktail, so fill your guests’ bellies with lots of heavy foods before mixing this potent drink. Serving cheeseburgers, chicken wings, and even hot dogs to accompany this beverage is a wise idea. The Dark Lord’s Deadly Long Island Iced Tea is mixed with four different types of alcohol and topped off with a splash of soda, so it’s imperative to drink responsibly. Remember, it’s named after Lord Voldemort for a reason!