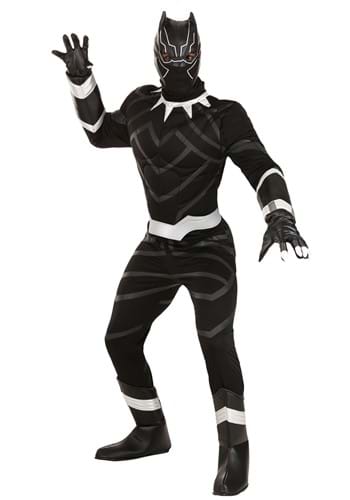 The Claws are Out

T'Challa is one determined guy. When supervillains like Thanos threaten Wakanda, he doesn't just sit on some throne, barking orders. He suits up, sharpens his claws, and starts tearing down the bad guys. He thought he was just going to stroll into the Black Panther's country and threaten the very future of the Earth? Get outta here!

Well, if you're just as determined as the King of Wakanda, then maybe it's time for you to become the protector of your neighborhood! All you need is a strong sense of justice, the will to protect your people, and a few special moves to use on the baddies. And an awesome suit never hurts either. This Premium Plus Size Costume will have you dressed for the dangerous task of protecting the world from thugs like Thanos.

This officially licensed costume recreates the fierce outfit worn by T'Challa in the Marvel Avengers films. It comes with a black jumpsuit that has plenty of printed details to give it a sleek superhero style. The suit also comes with muscle padding in the chest and arms, giving you a fighting physique! It comes with a pair of boot covers that fit over most pairs of shoes, so you can wear your most comfortable kicks while you kick some supervillain butt. Of course, you don't want the bad guys recognizing you, so you're going to need a mask! This costume comes with a Black Panther mask to round out the whole look. Once you put it on, you'll be transformed into one of the greatest superheroes of all time!