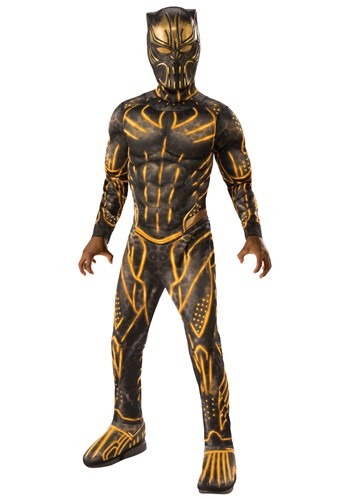 Go for the Gold

Shuri has always been a fan of putting together the very best in Vibranium technology. Of course, you can't just show up with the best stuff right away. It takes some time to craft the stuff that is truly spectacular. Now, we aren't saying that the Black Panther's gear isn't awesome. It definitely is. But, also, it's just the Panther Habit that T'challa has been running around in for ages. If your kiddo is ready to take up the mantle of the Black Panther, there's better suits!

Now, don't get us wrong. Killmonger definitely had some issues. (You know, the whole villain thing generally comes with some pretty rough background problems.) But, we can't deny that he had style. He saw right away that the golden glow of the enhanced Panther Habit was worlds better than the old style that the former king kept around. Now if your kiddo really wants to be a stellar superhero (or even a villain), there's only one Battle Suit to go with!

Bring the ultimate in Wakandan technology to bear with this Deluxe Killmonger Battlesuit for kids. This is a bodysuit that features fiberfill padding to give the added muscles of a true Wakandan king. The entire jumpsuit is detailed to look like the enhanced Panther Habit and includes shoe covers to get them geared all the way to their toes. To top off the costume, they'll have a molded plastic mask that has an elastic band and mesh covering over the eyes.

T'Challa definitely did some great things in his blue-tinted Black Panther outfit. But, everyone wears blue! When your tyke is ready for some Black Panther fun, go for the gleaming gold of this Killmonger Battle Suit costume instead! (We just hope that they'll go the heroic route with their superpowers.)