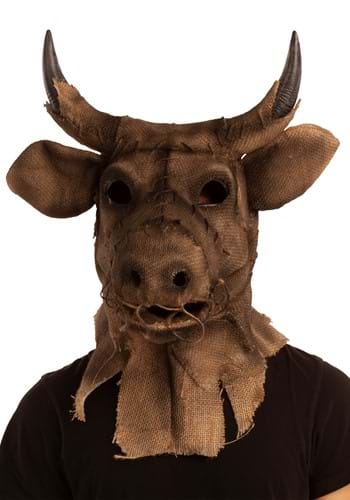 Standing up on two legs, the bull-headed figure begins scraping the ground with its cloven hooves. The stone cracks and scrapes beneath it as its head lowers into a charging position. Luckily, Theseus had smuggled in a sword in his tunic with the help of Ariadne, so he was not altogether unarmed.

As the animal charged, Theseus dodged at the last second! More beast than man, the Minotaur was no match for an armed and prepared hero. King Minos would not be happy when Theseus emerged from the Labyrinth alive, but he intended to do so nonetheless! Having slain the minotaur, Theseus returned along his string path and returned with Ariadne to Athens, becoming King Theseus.

You Get the Horns

Finding the scariest bull mask is not easy to do, but you have done it! This Adult Sinister Bull Mask is the coolest and creepiest thing with two horns. The empty eye holes and poorly sutured maw add to the horror of the already scary stained burlap-looking mask. The protruding horns are enough to keep most at bay, even without the scariness of the mask itself. Just be careful that you don’t get caught by animal control when you are wandering around in this convincing, creepy mask!