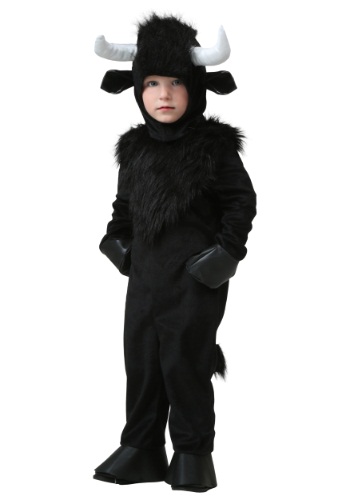 The animal world is vast and diverse, including creatures that are anywhere on the spectrum from hands-down adorable to freakish and alluringly terrifying. So, why is it that all we ever see on the Internet are cats!? Okay, perhaps that’s a little bit of an exaggeration. We see dorky dogs and portly pigs and even the occasional bear or fox that comes to investigate some toys left outside on the porch. Just think of how many animals are out there that aren’t being given their time in the sun!

It is because they’re not seen as cute, of course. Just think of the poor bull. Big and bulky with those odd horns and grumpy looking face… Nobody makes adorable Internet videos about the bull, but we think that is entirely unfair. They’re… uh… majestic. And, um… strong! And, just think of that powerful… moo?

Alright, perhaps they aren’t known for being entirely adorable, but you can change that with this Toddler's Bull costume. With a fuzzy velour jumpsuit and fur collar, not to mention the transformative faux leather hooves and stuffed tricot horns, your child instantly transforms into a bipedal bull and instantly turns the bull into one of the most adorable creatures that has ever been seen! Imagine the smiling face of your bull-child as a mighty victory pose is struck after obtaining so much moooo-re candy than anyone else! Get a second size for yourself and your herd will knock cats off their high-horse on the Internet in no time. (Okay, maybe bulls won’t beat cats, but we can sure try!)