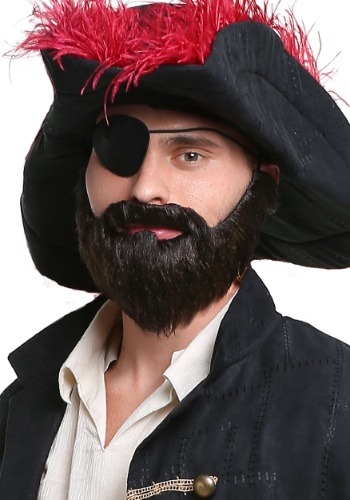 Did you know the infamous Captain Blackbeard was actually rumored to have lit his own beard on fire in battle? Yup, if true, it was his idea to try to both intimidate his enemies and to make them think that he was a little off his rocker, and according to historical accounts, the tactic was indeed successful.

This Pirate Ruffian Beard is styled to look just like a beard that would have been sported by a rough and tumble captain of the high seas, i.e. a pirate just like Captain Blackbeard. With 100 percent synthetic fibers, the strands are jet black, and the faux facial hair prop secures to your head with an elastic band.

So, just in case any ideas are fermenting in your brain right now, we have to add that we seriously do not recommend lighting your own beard on fire. Seriously. Especially, and we can't stress this enough, when your beard consists of synthetic fibers! Yes, your own real hair will burn and will probably scald you too, but lighting up synthetic hair will straight up start a four alarm fire. So, to recap, make sure you complete your authentic pirate costume with this beard accessory, but whatever you do, do not try to light it on fire!