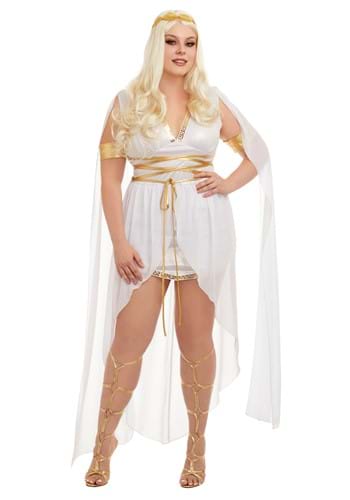 When Venus gave birth to Aeneus’ ancestor, she never thought her actions would have so much impact on the world at large! From that one line came many descendants, including all those who founded the city of Rome on its seven hills.

As if that weren’t enough, Aeneus’ travels led him through wonderful Carthage, where he met, loved, and then spurned the queen, Dido, whose subsequent suicide at his departure created an everlasting enmity between those two peoples. That was no doubt not what the goddess of love had intended!

If you are looking for a costume that will make you look like the goddess you are, then you are in the right place. This Women's Plus Size Venus Costume has it all, including the dress with its attached drapery, the arm cuffs, and the golden tiara. You will bear these golden laurel leaves proudly as you show the world that you are more than mortal. When you walk around in this flowing dress, you will feel the confidence of the goddess Venus herself as the cloth gently drifts behind you. The pure white and bright gold details of this costume will add a lot of glitz and glam to your look, so you definitely won’t seem out of place on Olympus!

Becoming more of what you already are inside is what dressing up is all about, so this Women's Plus Size Venus Costume will be perfect for you. Just make sure you keep your feet on the ground despite your angelic looking attire!