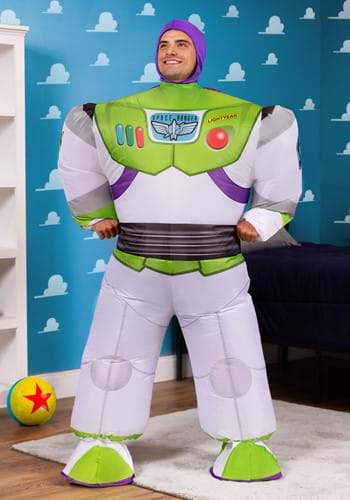 HELIUM IS NOT ADVISED

We know that the combination of Buzz Lightyear's "to infinity and beyond" catchphrase plus the look and name of an inflatable costume is giving you ideas. You're thinking that Buzz Lightyear has those wings and that, with a click of the button, he can jump into the air and swoop around thanks to the might of his jetpack. You're imagining some kind of helium-powered floating suit that will give you the same flying ability that Buzz can utilize!

Don't get us wrong; we love the direction you're going. We are working on a costume that will let you fly around while looking fantastic. (Just think about the benefits and authenticity that flight will give our witch, genie, and bald eagle costumes!) However, remember that Buzz Lightyear, as we know him, can't actually fly! He's a toy; a child's plaything! Those button activated wings are for show, only, and helium really only helps humans talk particularly funny!

The fact that this Inflatable Buzz Lightyear costume isn't going to help you actually fly doesn't mean that you aren't going to be thrilled with it. Not only is this an officially licensed costume from the epic Toy Story series, but it is one that is going to have you looking particularly authentic. That's because this costume is a jumpsuit with all the printed details of our favorite toy space ranger and the power armor puffs up into a really rounded look when the included fan is activated! Elastic keeps the air from escaping (and even keeps you feeling cool)!

If you're still aiming for a flying Buzz, we recommend going about some of the methods Buzz actually uses. That will require extensive Toy Story movie research, which we know you'll love. We would note, though, that additional helium balloons is a fun idea... but watch out for spinning propeller blades. (You wouldn't want to damage the suit!)