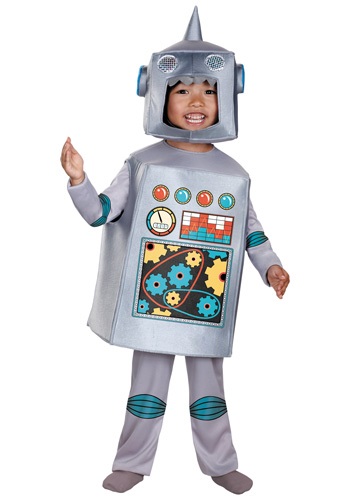 Yeah, sometimes your kid comes up with some weird languages. But recently he has been trying to speak like a robot. You can kind of understand what he is trying to say based on what he is pointing at, and what time of day it is. (Yes, buddy, we get it, it's lunch time, we won't forget the grapes.) But, he is so adorable when he is talking like a robot. Heck, you even have a phone full of videos of him doing it.

You love his imitation of the robots he sees in movies. The people like ones he saw in Robots, and the lovable EVE, and WALL-E. He even imitates Bender from Futurama, and he only saw him for a minute before you realized your little munchkin had snuck out of bed.

Now you can get him a this Retro Robot Costume, so he can look like a robot as he beboop-clickety's you. Play time has never been so adorable. All you will have to do is teach him how to move like a robot. Hopefully he will be more like the compassionate WALL-E than the beer drinking, fire-burping Bender. (Seriously, he only saw him for a minute, and yet he still tries to burp fire.) And the longer your kid speaks his robot language, the easier it should be to understand him. Well, easier to understand everything in addition to lunch time, and the grapes. (Buddy, we won't forget the grapes this time. Promise)