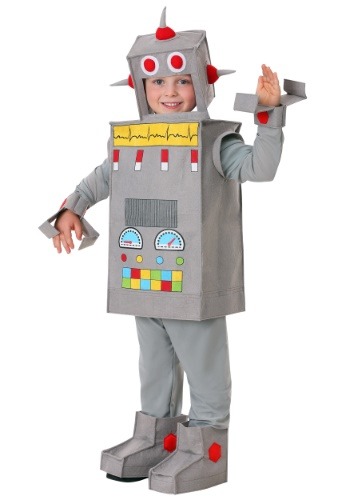 There have been signs for years now. Our phones have been getting smaller. Kids have been learning to code their own toys. And what's with that ice cream that comes in the form of tiny balls? Yep, the future is now and if we had been paying attention we would have already known. If you had been warned, you wouldn't have been surprised when your toddlers started talking in beeps and boops. One morning you served them yogurt and berries like usual and they simply refused to eat, asking for motor oil instead. You thought it must have been a fluke. Then you noticed how they were walking when they got up to go play. Yep, they were doing a mobile version of the robot. You have a choice, of course, you can either fight the future or embrace it. Our opinion? There's no fighting this wave of technology. Compromise with your kids, if they stay away from motor oil and eat a human breakfast, you'll let them dress in this awesome futuristic robot costume!

Let your kiddo become part of the future with this hilarious robot costume! Since it's Made by Us it's comfy, well-designed, and high quality. The featured tunic is structured but soft enough to keep playtime comfortable with imagination inducing buttons and charts printed on the front. Your kiddo can totally transform with boxy boot covers, wristlets that make hands snappy, and a headpiece that sets the look off just right.

Here's the thing about robots, they've gotta have fuel to run. Your little robot just might happen to run on candy, which is pretty convenient on Halloween night. Have them speak robot when they're trick-or-treating and who knows how much chocolate you'll get. You know what they say about robots and efficiency!