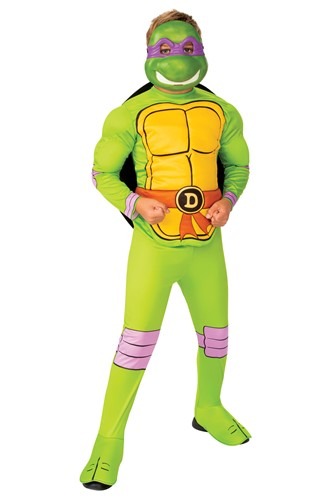 You know, every Teenage Mutant Ninja Turtle has their thing. We think that's pretty cool... but if you really put some thought into it, Donatello's "thing" really is the best. Here, we'll explain. Raphael's thing is being cool but rude. That's great if you're trying to come up with fun one-liners, but is it really all that useful when you're trying to defeat the Shredder? Michelangelo's thing is partying. Again, that's all fine and good, but eating crazy amounts of pizza and having the best dance mix on your music player might not actually be a great skill for a ninja to cultivate. Of course, Leonardo's skill of being a leader is decent, but what happens when the TMNT finally beat Shredder? Leo's skills mean that he's stuck working middle-management. Then, there's Donatello! He's the one that built all of their gadgets. He can fix the Turtle Van with scraps and parts found in the sewers. He's even a wiz with computers. Donatello definitely takes the cake when it comes to special skills!

If your child has some serious skills, then it's time for him to suit up as the smartest turtle of them all!

This Classic TMNT Donatello Costume is an officially licensed kid's costume that transforms any child into their favorite turtle. The costume comes with a light green jumpsuit that has a printed shell in the front. It also comes with attached boot covers that fit over most pairs of shoes. The foam shell that fits in the back is designed to look like Donatello's shell. Finally, the costume comes with a molded mask that's shaped like Donnie's face. When your child has it all on, they'll look like the most skilled turtle of the team.

Any kid ready to be the smart guy of the team will love dressing up as Donatello. With a classic look and a simple design, it's a easy choice for any skilled young fan!