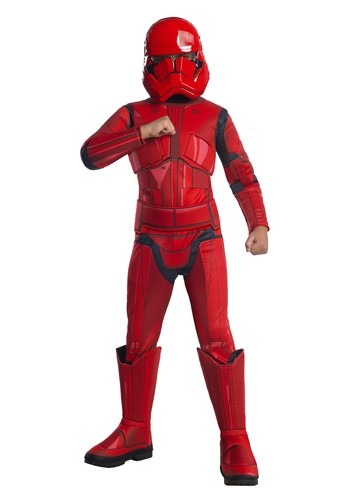 The Stormtrooper suit has a pretty menacing look. Ever since the first Star Wars movie came out, the mere image of the Stormtrooper suit is enough to send a shudder down every Rebel's spine. It became the symbol of military supremacy for years during the Galactic Empire's reign. Then, the First Order liked the look so much, they decided to adopt it for their military force too! They made some subtle changes and continued the tradition. Well, now we bring you the next evolution of the Stormtrooper outfit... the Sith Trooper armor.

It takes the classic, terrifying look of the Stormtrooper gear and adds a dangerous red color scheme to it. And now, with  this Kids Star Wars Deluxe Sith Trooper Costume, your child can assume the role of the galaxy's finest warrior.

This Sith Trooper Costume for kids helps your child look like an elite soldier from Star Wars: The Rise of Skywalker! It comes with a bright red jumpsuit that has printed armor details to recreate the look from the movie. It also comes with padded armor pieces on the chest to help your child look ready for a battle! The attached boot tops let your child wear any pair of shoes with the suit. The foam belt fits around your child's waist with a fastener in back to bring the look together. Of course, the most iconic part of the Stormtrooper suit is the helmet! This costume comes with a molded plastic mask with mesh eye holes in the front to fully transform your child into a menacing Sith soldier.

When your child suits up in this Sith Trooper costume, they'll be ready to carry on the long tradition of Stormtroopers in the galaxy far, far away.