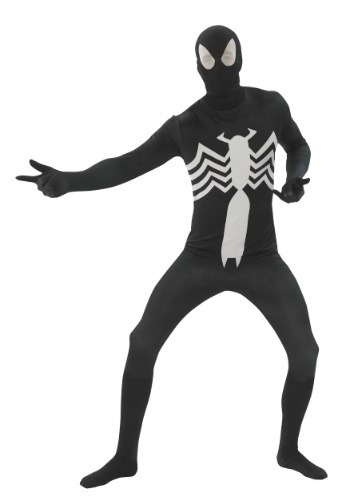 Listen, we know it. The Black Suit Spider-Man outfit is the best one. Sure, the Iron Spider is cool and so is the classic costume, but the symbiote suit just has that certain “je ne sais quoi” that can’t be expressed in words alone. Of course, we get why Peter Parker doesn’t really wear that suit anymore. The Venom symbiote really started to cramp his style. It gave him some more violent tendencies and started to control his body while he slept. Not cool, Symbiote. Not cool.

Well, the good news is that you can get Spider-Man’s black suit and you don’t need to bond with a symbiote to do it. You also won’t have any sort of strange mood swings! All you need is this officially licensed 2nd Skin adult costume.

This Spider-Man black adult costume recreates the classic costume that Peter Parker acquired during the Secret Wars comic books. This one is NOT alien lifeform, but is instead a spandex blend jumpsuit that fits like a glove! The front of the costume has the white spider symbol on the front. The mask portion of the suit has white mesh eyes for vision, but it does reduce some visibility while wearing it. Finally, make sure you hand wash this bad mamma jamma in cold water. It doesn’t like to be placed in the washing machine and it will hold up much better if you use those hands of yours to wash it!

Whether you’re planning on jumping into the superhero game or you just want a sweet outfit to wear to your costume party, this Spidey suit will be great for you! And you don’t even need to head to an alien planet to get it. You just have to toss it in your cart and we’ll send it to your doorstep.