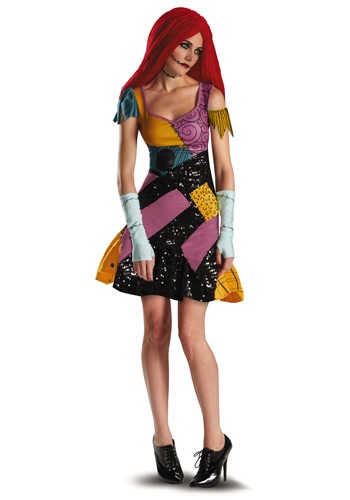 It's a dark and stormy night. The mad scientist rushes about the lab, making sure everything is ready. As lightning strikes the tower, electricity bolts through the figure on the lab table and the doctor laughs uncontrollably, it's alive! Sally is definitely the loveliest of all the creepy lab creations in film history. Not only is she lovely, she has the borrowed brains to back up her looks. She knows exactly how much deadly nightshade to put in Dr. Finkelstein's soup to make him doze off for the night and she can see disaster coming while everyone else is wound up in the excitement of a very bad plan. To her, the love of the king of Halloween town might seem like a far-off fantasy, but we all know. A girl like Sally can make anything happen.

When Sally and Jack get together, where would they go for a date? Jack wouldn't be into the idea of eating dinner, what with him not having any guts. Plus, all the steakhouses in Halloween Town might not be trustworthy, where are they getting that filet mignon anyway? Jack and Sally would probably find a place to go dancing. If nothing else Halloween Town has some great music. When Sally is hitting the town she'd be sure to dress up and put on her classiest patchwork dress. With this flattering ensemble, she'd keep the ghouls talking for weeks. After being locked in a lab most her life, she deserves to paint the town red.

When you sense there's something in the wind, know that that’s it's not tragedy at hand. That feeling is simply anticipation for this Halloween. After all, since Jack is still the Pumpkin King, when you dress as Sally this year that makes you the Queen of Halloween.