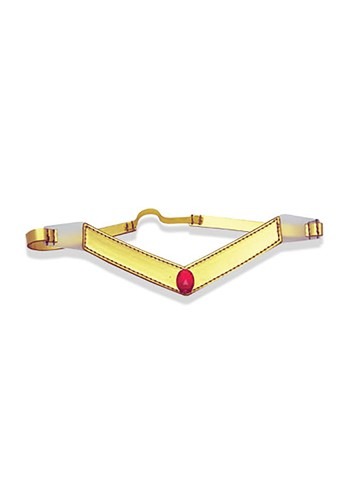 Now, the idea of a princess from Mars usually belongs in a comic book alongside a guy in blue spandex and underwear worn as outer-wear.  But, when you're fortunate enough to be living in the universe of Sailor Moon, a planetary princess becomes an entirely different thing!

All know that the Sailor Scouts are ready to keep the galaxy free from all sorts of dangers hiding in the shadowy realms beyond, but who knew that each of the scouts were once princesses of the planets of their namesake!?

Really, it makes all the sense in the world.  Why else would Sailor Mars be wearing this lovely, magical Sailor Mars Tiara?  And, better yet, the reincarnation of the Princess of Mars may yet awaken.  Perhaps it could be you!  Discover the truth when you wear this officially licensed tiara and feel the soft gold fabric and touch the faux gemstone of power.  We suspect you'll be saying "Mars Power!" in no time.