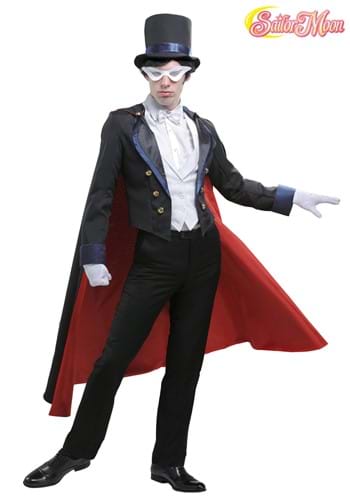 THE LOOK OF A PRINCE

Usually, if you've got a story about heroes that transform into a group of magical girls who defend the galaxy from forces of evil, you get used to the idea that there are going to be two different looks... two identities!  We might also expect that there might be someone else with a secret identity, perhaps a friend who is actually a villain or a long-lost ally in the war against the darkness.  Well, in Sailor Moon, you're going to get a whole bunch of all of that!

But, then you have the quizzical existence of Tuxedo Mask.  Who is he!?  Is he an ally to the Scouts or an opponent?  How about that college guy who is always picking on our civilian Sailor Moon?  Well, truth be told, he has three identities!  Tuxedo Mask is not only the secret (usually) hero aiding the Scouts, but also that trash-talking college kid... and the Prince of Earth!?  Well, with that much going on in a guy's life, he might need some help!

Even though it's been a while since Prince Endymion has walked the Earth, our in-house designers are still happy to serve our protector and future hubby to Princess Serenity! What better way than with this officially licensed Tuxedo Mask Costume from Sailor Moon?  This exclusive look includes slim-fit tux pants and a shirt front with a white bow tie attached to the collar.  The elegant tuxedo jacket features shining golden buttons and a long black cape with Tuxedo Mask's iconic red lining.  The tall top hat has a blue band that matches the jacket's lapels and you need not fear for your identity thanks to the white mesh eye mask.

We don't know a ton about being Terran princes, but we do know that Tuxedo Masks have a pretty dangerous aim with flung flora.  So, we will take care of making you look the part and you just worry about your underhanded rose throw!