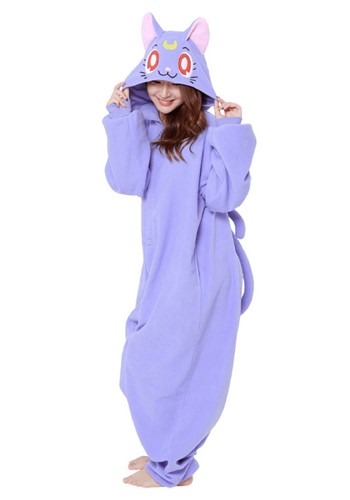 The Destiny of a Cat

Luna is the most important character in Sailor Moon. Why? Well, isn't it obvious? Had Luna never tracked down Usagi Tsukino, then that she never would have learned about her greater destiny in the universe! Her sleeping powers may never have been awakened. She never would have connected with the other Sailor Senshi and Queen Beryl would have destroyed the entire planet just for fun. She never would have met her true love, Tuxedo Mask! Yes, without Luna, they would have had to change the name of the anime series to "Teen Girl Doesn't Study for Test" instead of "Sailor Moon"! Usagi would have spent her time flunking math tests and eating ice cream... which would have been a much less interesting series.

Well, the good news is that Luna DID meet Usagi and the little kitty helped her achieve her destiny! Perhaps you can do the same for a Sailor Senshi when you wear this Sailor Moon Luna Kigurumi Costume!

This Luna Kigurumi is a Japanese-style pajama costume that's officially licensed from the classic anime series, Sailor Moon. Constructed out of a fleece material, the pajama suit feels too soft to believe! It fits with buttons down the center and it even comes with a pair of pockets along the side seams. A plush, stuffed tail is attached to the back of the outfit for good measure, but the absolute best part about this costume has to be the hood! The hood has appliqued details, like Luna's adorable eyes and nose, along with a pair of stuffed kitty ears on the top. Just flip up the hood and you'll feel like one cozy kitty!

Whether you decide to fight against the forces of evil or just take a catnap, this Sailor Moon Luna Kigurumi is the perfect outfit to wear!