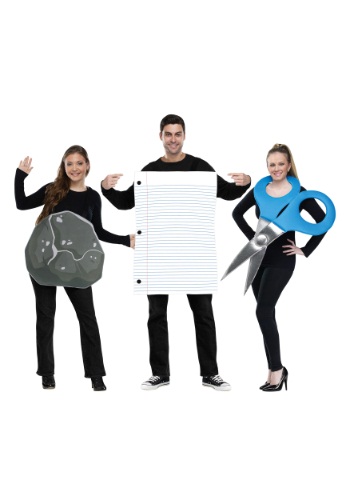 Not only will you and your two pals be a hit at a party, but just imagine how many potential decisions you can help make in this Rock Paper Scissors Adult Costume!

Are your friends deciding who has to take out the trash at the end of their house party? Inspire them to Rock, Paper, Scissors for it! Is your crew deciding who will call the rideshare? Rock, Paper, Scissors, you tell them! It's a simple game, and an ancient one. It’s the game everyone claims to be “amazing” at. What’s your strategy? Do you always throw rock? Do you tend to lay down paper until it “feels right” to switch to scissors? Don’t give away your secrets! Instead, you three should Rock, Paper, Scissors your way through the night and inspire others to do the same. Hey, maybe you picked this costume via a game of Rock, Paper, Scissors...that’s great! We applaud you.

This group look is so quick and easy, you can wear the costume pieces over your ordinary clothes. The Rock and Paper have shoulder straps and waist ties, while the Scissors slips right over your head! Maybe you three ought to Rock, Paper, Scissors over who will be which look. And if you don’t get your first choice, you can always go best two out of three. Now that is one costume solution that sounds like a win-win-win.