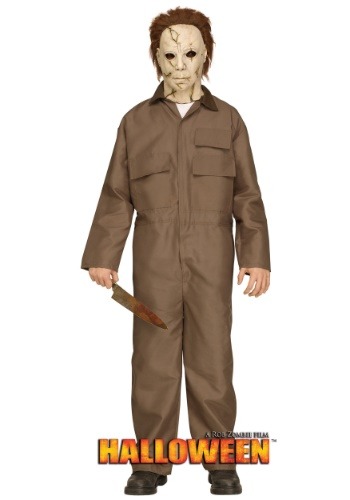 Here We are now, Entertain Us

Some people might say Michael Meyers isn't a very nice guy. In fact, he's got a rather destructive streak. The thing is, he's got no excuse and he doesn't try and make any. He does what screenwriters ordained he should do. So while we might see him as the ultimate teen rebel, he's actually very reliable when it comes to his career. When it's time to send horror creeping up our spines, he never lets us down.

Decade after decade he perfectly times his entrances with the suspenseful music. Never once has he missed a jumpscare. While this legendary villain has caused plenty of destruction movie after movie, he's just doing what we want him to do when we buy those theater tickets; he scares the living daylights out of us. Now, shouldn't we honor him after such a long-standing stable career?

While we don't expect you to live up to the legend immediately after suiting up, this costume is sure to give you a leg up when it comes to fright factor. The jumpsuit is comfortable with hook and eye strips up the back that makes it easy to slip on fast. It has functional pockets so you can even bring along your cell and wallet during Halloween festivities. The whole ensemble is topped off with a soft mask and attached Alpaca wig so people will recognize who you are as soon as you emerge from the shadows!

From Zero to Hero

Are you sick of poor Mikey getting the short end of the stick? Set the record straight this Halloween and show what a hero he can be. Chase off pumpkin smashers and help escort your siblings and their friends around town. No way kids are going to steal from kids that Michael Meyer's is protecting. And yeah sure, we're sure you'll have time to get a jumpscare or two throughout the night. It is Halloween, after all!