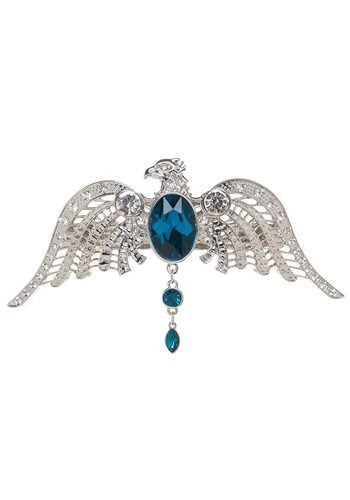 We assume, like most school kids, that Hogwarts students get excited about the start of a new year. There's a rush to the stores to get all the supplies on the new list plus a few fun extras. Whether it's a new pair of shoes, a new set of robes, or a lovely set of writing quills, there's always at least one thing to set the tone of the upcoming term. This year, we suggest going big—make a statement, boost your talents, and look like a legend!

With this Harry Potter Ravenclaw Diadem Hair Barrette, you're going to look like the most brilliant witch of your age. The officially licensed barrette is shaped like Rowena Ravenclaw's infamous tiara. We heard a rumor that the wearer will be granted wisdom beyond measure, which seems a sure-fire way to have an excellent school year.

For a Clever Costume

Looking to add some authenticity to a Rowena Ravenclaw costume? This Diadem Hair Barrette is perfect for that too. As an avid fan of the Harry Potter series, and a true Ravenclaw, you know no Rowena costume would be complete without her diadem—unless of course you're going for some drama here and want to include a jealous daughter to the equation... Either way, you'll want a diadem to complete your clever costume.