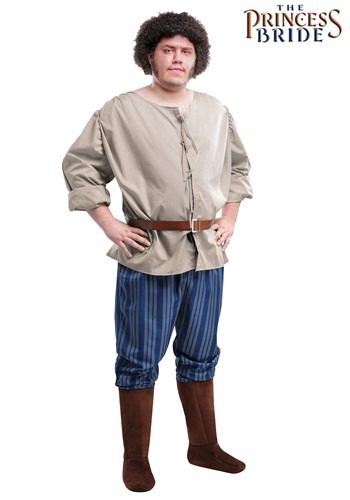 Looks can be quite deceiving. Fezzik might look kind of scary, but he’s actually quite the noble gentleman at heart. Sure, he can probably knock over a mob of men with just one swing of his mighty arm and he’s probably strong enough to lift a horse. He also looks quite menacing when he’s holding a giant boulder above his head to crush his foe. Really any one of those things would be enough by themselves. But, all in the same 7-foot-tall guy? Scary!

But, in all reality, Fezzik would much rather spend his time playing rhyming games with Inigo or drinking a nice glass of wine with his pal Westley, the newest Dread Pirate. He only does that rough stuff for Vizzini to pay the bills anyway! Once that Sicilian loses his mad quest for—what was that guy trying to accomplish?—it's time to join Westley on the noble quest for true love and, in the process, earn everyone's eternal love!

Whether you are the type with the strong physique of a lion or the heart of a kitten, it is time you transformed yourself into the iconic character from The Princess Bride. Our costume designers crafted this adult Fezzik costume, which is an outfit that faithfully recreates the one worn by Andre the Giant in the film. It comes with a loose-fitting tunic shirt, striped blue pants, a brown belt, and a pair of matching faux leather boot tops.

Once you garb yourself in the seemingly simple look of Fezzik, our favorite hero of The Princess Bride, you won't be able to help yourself from calling out the quotations. But, if you really want a great group costume, get the rest of the team and play out your favorite scenes!