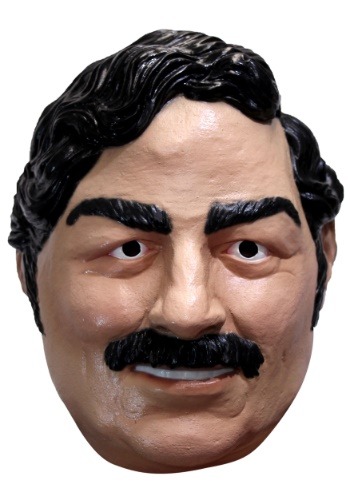 READY TO BE WEALTHY?

Most of us have a dream of being famous all over the world and wealthy enough to know that we can buy just about anything that we'd like. Of course, unless you're going the route of a famous movie star, options are limited.

Now, history has given us a few figures that hit that level of bank account and worldwide fame in other ways, though it is pretty sketchy how they got there! We really don't recommend that anyone follow the path of Pablo Escobar. Having words like 'narcoterrorist' associated with you is pretty risky and there are much more refined kinds of 'lords' to be that don't involve quite so much illicit behavior!

Instead of living out the dangerous life of the Columbian drug lord, you can just wear this Pablo Escobar mask and have the vicarious thrill of looking like the King of Cocaine. This latex mask fits over your head and has realistic paint work to make you look as authentic as we can... without risking police being called!

We're not sure if there is any kind of mysterious vault filled with secret money that Escobar had upon his departure from the world, but we do know this mask won't get you closer to it. Still, it might make a fun look for an evening!