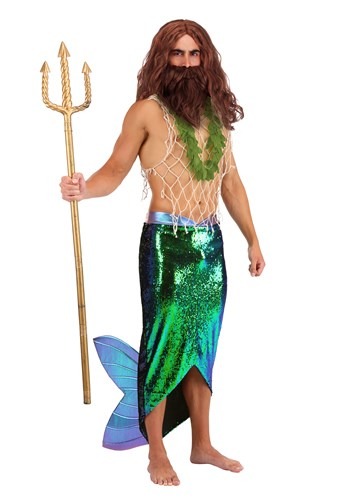 A Little Salt Water on the Wounds

Let's set the scene. Deep in ocean, just a few kingdoms down from Atlantis. Exotic fish swimming from place to place. Maybe there's a strange sea witch that slinks in the shadows in an underwater grotto. But, just as the whole ocean is getting ready to belt out a big number about how great it is to dwell in the down under, who is going to take center stage? Some adorable red-headed mermaid princess that wants nothing more than to throw in with a surfacer!?

What about you!? This was supposed to be your moment. You were going to show up and become the next hero of all the merfolk in the ocean. But, don't fear. And don't get salty over a little spotlight-stealing. The story isn't over and it's now your time to flap those fins and finish the tale! Go for the gold. Grab that magical trident. Maybe even win yourself a coral crown. Because, in the sea, a little bit of salt goes a long way!

Transform into the mighty merfolk that you were meant for with this Salty Merman costume. This is a Made by Us exclusive designed to shine a little light on the merman in the ocean, too! The costume features a shimmering tail skirt that has a vertical tail fin in the back. Your top is a wide fishnet shirt, the very best of undersea fashion mixed with surface materials! Finish off your look with a seaweed boa and swim your way to Halloween fun.

No Need to be Salty!

Take a glorious leap out of the seas and prove you're the merfolk to be watching with this Salty Merman costume. Of course, you could make a great group costume with a few mermaids, too. (Just don't get Posideon jealous!)

Does it include the beard/head piece.