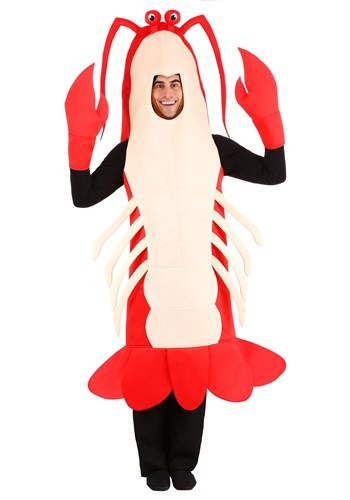 It Wasn't a Rock

Have you ever seen one? You know, when you're hanging with your friends at the beach and everyone has matching towels. One of your friends goes under a dock. That's when they see it! It almost looks like a rock... but it's not that at all! In fact, it's a living creature, It's one of those crusty crustaceans making motion in the ocean. Sometimes they hang out with their friends the stingrays and the manta-rays. Maybe it'll even spot a dog-fish being chased by a cat-fish now and again. Yes, it wasn't a rock. It was a rock lobster!

If you're a fan of the B-52's, then you know all about rock lobsters. If not, then it's cool. This Rock Lobster Costume is for anyone who loves crustaceans... or post-punk dance-rock music.

Our designers wanted to combine the look of a rock lobster with a cute and cozy style that you can wear all day!  They studied plenty of real lobsters and listened to a TON of post-punk dance-rock music. Finally, after fully embracing the crustacean charm of lobsters, they came up with this Rock Lobster Costume! The costume consists of a red bodysuit that features a cream-colored front. It also comes with little white dangly legs that hang down in front. The top portion is shaped like a lobster's head, complete with a pair of bulbous eyes and some antennae. Finally, you can't be a rock lobster without a set of claws to keep the party rockin'! This costume comes with a pair of mitts that are shaped like claws to round out the whole look.

It Was a Rock Lobster

If you can't tell by now, we're huge fans of the B-52's. While this Rock Lobster Costume for Men has absolutely nothing to do with the popular song with the same name... we still can't but imagine that the best use of this costume is put on their record and start rocking to the beat as a cantankerous crustacean!