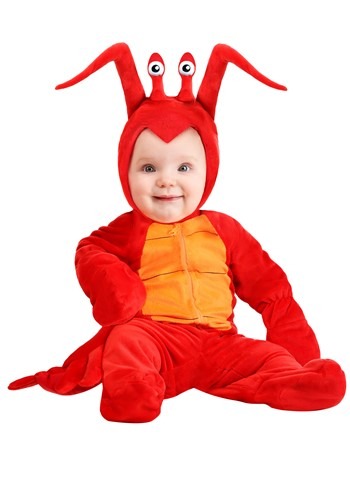 A QUESTION OF IMMORTALITY

Turns out that the lobster, for all sorts of neat genetic reasons, can keep growing and stay active for about as long as they've got the energy to do it. Their DNA sort of gets patch notes to repair itself way longer than the rest of us. (Lucky little sea monsters!) But, the problem is molting. As they get bigger, they've gotta ditch the old outerwear and grow some new stuff. That gets pretty exhausting! But, the old exoskeleton eventually breaks, so they can't just not molt, either. Catch 22, as they say!

Inspired by this amazing creature, our own design team (who are also avidly seeking the fountain of youth) put together this adorable Rock Lobster costume for your babe. This is a super soft red and orange onesie that is Made By Us, so you're guaranteed high-quality construction that'll last a long time! The hood features antennae and adorable eyes and the lobster tail is there on the back end.

We're not saying that this costume will actually last forever or actually prevent your baby from ever growing up. (That's our jellyfish costume.) But, what we can promise is that this costume will help to craft some memories that likely will last an eternity. Plus, we've got multiple sizes, so that molting thing could be pretty accurate (and way less tiring than normal).