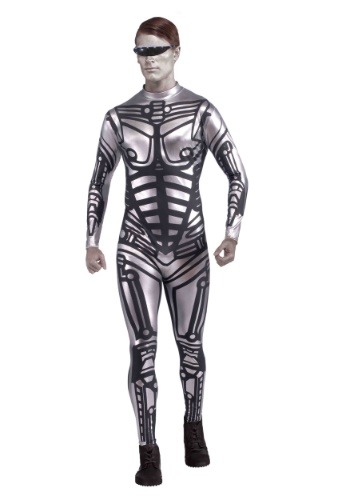 "Ahhh! Robots are going to take over the world!!!"

Freaking out yet? Computers are increasingly running the world. Autonomous vehicles have started driving on roads. And Artificial Intelligence is seemingly right around the corner. We're not saying that this is anything to get alarmed about, but, well, if you are? We do have something you can do about it.

Yup, if you're anticipating a robot takeover of the world, just get ahead of the curve. By becoming a robot! Isn't that a genius idea? We sure think it is, and we just have happened to create the perfect style to transform yourself into a futuristic robot. This Men's Robot Jumpsuit Costume!

This costume consists of a full body jumpsuit in a metallic silver. It has a black pattern printed on the suit, which is totally reminiscent of what a robot might look like. Light up glasses are included, too, so you can be a little bit of a funky android. The only thing you'll need to complete the effect, as we have it pictured, is some silver body makeup. That part is optional as you can use this jumpsuit to create any costume style you choose, of course!

What are you going to do as a Robot? You could be an assistant to your human companion, as robots are typically imagined. You could be an action bot, fighting bad guys to save the day or even a slick robot bartender who listens to all of his patrons and advises them with the calculated wisdom of a computer algorithm. It’s up to you! We just sell awesome costumes, after all, and leave the fun stuff up to you.