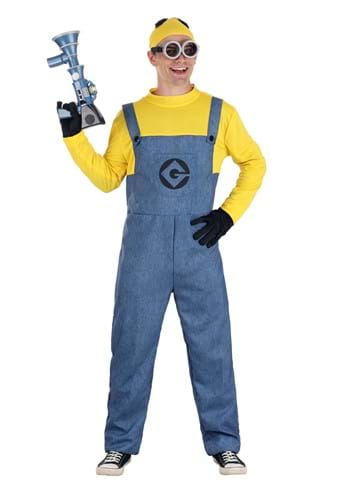 What do Vector, El Macho, Balthazar Bratt, Scarlett Overkill, and the Vicious 6 all have in common? They're no match for the Minions! These supervillains may have an impressive range of weapons, but Gru's little yellow henchmen have...fart guns, a cool secret lair, and a really good sense of humor. It turns out that it's not about who has the most advanced weapons, but who makes the best use of them! (Also, no one wants to get hit with a fart gun.)

Take over the world, one moon theft at a time, when you wear your officially licensed Minion Costume for Men! This exclusive outfit includes a jersey knit jumpsuit designed to look like a yellow shirt under a pair of denim overalls. Buttons embellish the overall straps and Gru's symbol is printed across the chest pocket. Black gloves keep you from leaving fingerprints at crime scenes, while the yellow knit headpiece with its black yarn hair give you the Minions' famous hairdo. Plastic lab goggles complete your look!

Have you ever wanted to have a job that's all about tinkering with random science projects, driving rocket-powered machines, and eating bananas? Now you can! Get a bunch of friends together for a hilarious group project, or do a solo mission in the name of villainry. Either way, you'll definitely be a hit at parties, as long as you don't turn into a purple monster with a huge appetite. That can be kind of a dealbreaker for most hosts.