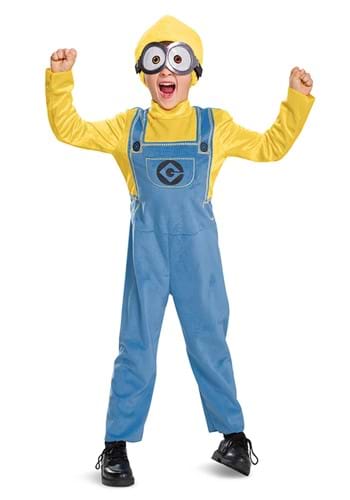 All hail King Bob of England, first of his name, fairest of all minions, who aided Sir Kevin, and whose speech at Westminster Abbey shall never be forgotten. Who could ever forget that most amazing of Minions, that paragon of virtue and yellowness? A truer hero hath never been known, nor hath a fairer heart ever sat upon the royal throne of the England. Fare thee well, Bob, wherever thine feet shall land and whenever thou arrivest.

If King Bob ever wanted to be President of the USA, we think he would be great. He is kind to a fault and truly cares about Kevin, Gru, and the other minions. If he ever did decide to take up the mantle of leadership again, 100 out of 100 of us in the office at Halloweencostumes.com have pledged to vote for him.

The oversized goggles and white rimmed eyeholes really help imagine that you are indeed Bob. The yellow shirt and blue overalls bring it all together in a palette of nostalgia that calls back to the simpler days of King Bob’s rule. Bucolic pastures and peace were had by all his subjects, near and far during that brief interlude on the throne. It was a time of plenty and a time of impeccable style—not to mention great music.

Minion to No Man

This kid’s Minion Bob costume is the perfect costume for any Minion fan. Whether you enjoyed him in the delightful film Despicable Me 2, or the acclaimed Minions and Minions: Rise of Gru, you will find that this costume is just what you are looking for.